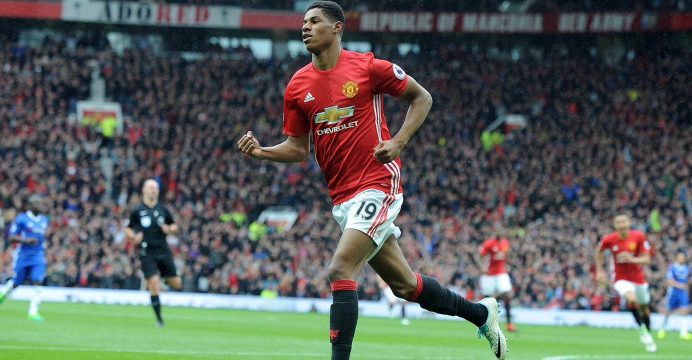 Mourinho says no sense in Rashford playing for England Under-21s

Manchester United manager Jose Mourinho has said it makes no sense for his striker Marcus Rashford to play for England’s Under-21 team in June’s European Championship, as the teenager had risen above that level, reports Reuters.

Despite Rashford breaking into the full England squad, national team manager Gareth Southgate has said he would like to have the 19-year-old at the youth tournament in Poland.

But faced with a growing injury list, Mourinho said he doesn’t want to see Rashford playing at age-group level.

“I just feel that when a player reaches a certain level, it doesn’t make a lot of sense to drop levels,” he said.

“It’s like him going to play now in the (United) Under-23s to win, let’s say, a derby against Man City. No. (Academy coach) Nicky Butt doesn’t take him to play that game. He could, by age,” added the United boss.

French striker Anthony Martial, recently challenged to improve his approach by Mourinho, replaced Ibrahimovic for extra-time on Thursday and could now be given a bigger chance to stake his claim.

Wayne Rooney, who has been sidelined with various injury problems in recent weeks, could be ready to make a return for Sunday’s visit to Burnley.

“But he has the experience and character, so he has to. Now we need absolutely everyone,” he added.

Mourinho has bigger problems at the back where a knee injury, also suffered against Anderlecht, to Argentine defender Marcos Rojo, leaves him with few options.

“We’re in trouble. In this moment, Eric Bailly played six matches in a row, and we lost Marcos Rojo, we don’t have (Phil) Jones or (Chris) Smalling. We are in trouble.”

Daley Blind stepped in alongside Bailly on Thursday but Mourinho also urged English defenders Jones and Smalling to speed up their return from injuries.