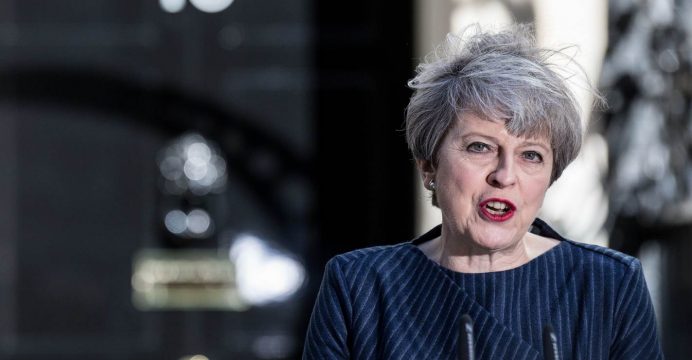 British Prime Minister Theresa May said on Friday that she was not taking anything for granted as she gears up for a snap election in June in which polls suggest her Conservative party is heading for a landslide victory.

May called the national election in a surprise move on Tuesday, saying it was necessary to boost her majority and provide stability as Britain gears up for two years of negotiations with the European Union about its departure from the bloc, reports Reuters.

Polls give May’s governing Conservative party a lead of around 20 percentage points, enough to command a majority that could be over 100 seats, but May said she was not complacent.

“The election campaign has only just begun. I’m not taking anything for granted. The result is not certain,” she said in a speech at a GlaxoSmithKline factory in her constituency of Maidenhead.

The Labour party has been riven by divisions over its leader Jeremy Corbyn and Brexit, while May’s commitment to a clean break with the EU has undermined support for the eurosceptic UK Independence Party.

While many specific policy positions have yet to be finalised, May did reaffirm a commitment on foreign aid spending – a pillar of predecessor David Cameron’s attempts to soften the image of the Conservative party.

May said that the pledge to spend 0.7 percent of national income on foreign aid would remain, following speculation that it would be scrapped in the Conservatives’ election manifesto amid opposition from some lawmakers and newspapers who said it should be spent at home instead.

“Let’s be clear – the 0.7 percent remains, and will remain,” she said. “What we need to do though is to look at how that money is spent, and make sure that we are able to spend that money in the most effective way.”