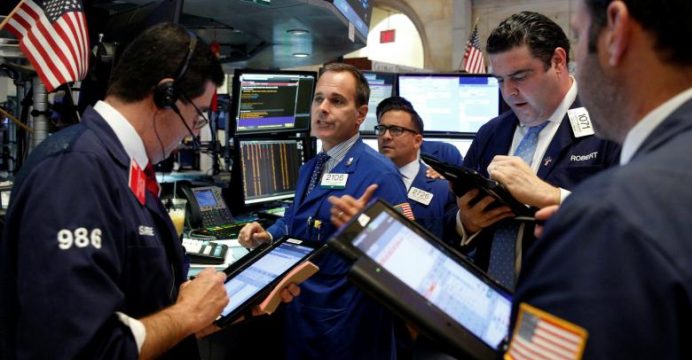 Weakness in petroleum-linked shares pressured US stocks on Wednesday, while London equities retreated again following the surprise announcement of a snap general election.

Oil prices fell nearly four percent following a build in US gasoline inventories that suggested weak demand ahead of the peak summer driving season. That resulted in sharp declines for petroleum producers such as Chevron and oil-services companies like Halliburton, which lost one percent or more, reports BSS.

Equity markets were also cautiously preparing for the first round of the French election, which has implications for the future of the eurozone.

“Investors continue to be challenged by an ever-rising wall of worry cemented by geo-political and domestic concerns,” said Sam Stovall, chief investment strategist at CFRA.

The pound retreated somewhat after posting solid gains on Tuesday on the election announcement, which was seen as strengthening the chance Britain would be able to negotiate a more favorable exit from the EU if May prevails.

Among individual companies, IBM slumped 4.9 percent as it reported a 13 percent drop in first-quarter profit to $1.8 billion and suffered its 20th straight quarter of year-over-year revenue declines.

Separately, broadcaster NTV, citing an internal document sent by the firm’s president, reported that Toshiba was considering laying off some 1,000 employees.

According to the Asahi newspaper, Japan’s industry ministry is considering having government-backed firms make a joint bid for Toshiba’s memory chip business with US semiconductor company Broadcom, amid concerns about the sensitive technology going abroad.