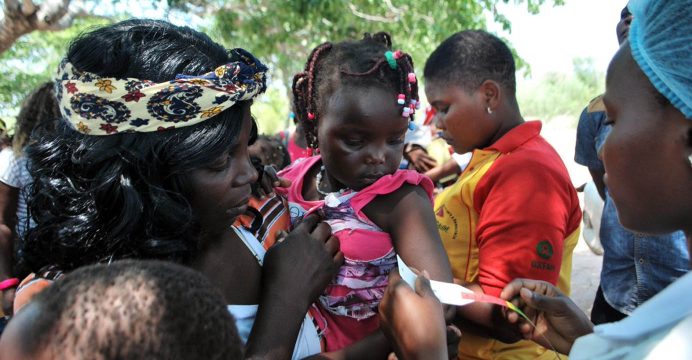 The United Nations World Food Programme (WFP) welcomes an additional US$2.7 million contribution from the United States to support pregnant and nursing women, and people living with HIV (PLHIV) or TB on anti-retroviral treatment. The funding will be used to buy, transport and distribute fortified blended food for the treatment of malnutrition among these vulnerable groups, whose situation has been made worse by the recent drought.

The additional funding will enable 170 health centres in the worst-affected provinces of Gaza, Inhambane, Manica, Sofala and Tete to provide 21,000 people with nutritional assistance throughout the year. So far, 100 metric tons of fortified food has been distributed, with an additional 770 metric tons to be given out soon.
“The United States is committed to supporting the people of Mozambique during these difficult times,” says US Ambassador to Mozambique H. Dean Pittman. “We’re committed to working with the most vulnerable groups, such as people living with HIV, to reduce suffering and ensure families cope with the negative effects of the drought.”

The contribution comes from the US President’s Emergency Plan for AIDS Relief (PEPFAR), through the US Agency for International Development (USAID). Mozambique is one of 22 countries in Africa receiving PEFPAR support and one of eight UNAIDS priority countries within the Southern Africa region, where efforts need to be fast-tracked to achieve the end of AIDS by 2030.

“A nutritious diet is an inherent component of care and treatment in the context of food insecurity,” says WFP Country Representative and Director Karin Manente. “Support from the United States will enhance the uptake of, adherence to, and success of treatment amongst the most vulnerable groups.”

PLHIV or TB are particularly vulnerable to food insecurity and malnutrition. Moreover, the antiretroviral medication they take loses efficiency unless combined with good nutrition. When PLHIV do not have enough to eat, they are less likely to adhere to their treatment – this can lead to increased viral load, opportunistic infections and progression of the disease. Food insecurity has been found to exacerbate gender-based violence and force people into harmful coping strategies such as transactional sex, which in turn can make them more vulnerable to HIV infection.