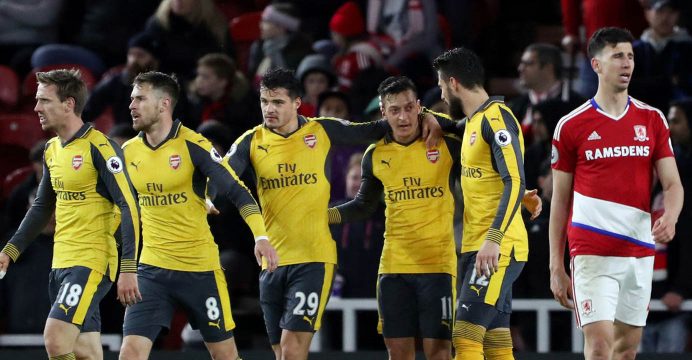 Goals from Alexis Sanchez and Mesut Ozil ended Arsenal’s run of four successive away defeats with a scratchy 2-1 victory over struggling Middlesbrough in their Premier League clash on Monday.

The Gunners’ performance was far from convincing but will still bring some relief to their beleaguered manager Arsene Wenger.

There was a period after Alvaro Negredo scored an equaliser when Middlesbrough, who have won only four league games this season, looked capable of going on to claim their fifth scalp.

Arsenal are new seven points behind fourth-placed Manchester City with a game in hand, while Middlesbrough lie six points from safety and have also played one game fewer than most of the teams above them.

“We knew we needed to win. Now we have a little break with the FA Cup (they play Manchester City on Sunday in the semi-final) and then we come back again to the league.”

At least Arsenal’s trip to Teesside began far more smoothly than their previous away game at Crystal Palace when they were caught in London traffic and arrived shortly before the kick-off.

They reached Middlesbrough’s Riverside Stadium with plenty of time to spare, yet there was still a lack of direction on the pitch as they searched for a route to goal in the opening stages.

Wenger had made the sort of selection decisions that he usually reserves for cup ties against teams from lower divisions.

The French manager announced six changes from the team that lost 3-0 at Palace seven days earlier and, even more significantly, employed wing-backs alongside a defensive trio for the first time since 1997.

His tactical alterations did not provide instant results, although they did enjoy the bulk of the early possession and Olivier Giroud’s claims for a penalty when he was floored by Daniel Ayala certainly had some merit.

Arsenal’s attacking difficulties were not unexpected because Middlesbrough went into the game after conceding only 37 goals — two fewer than Wenger’s under-performing side.