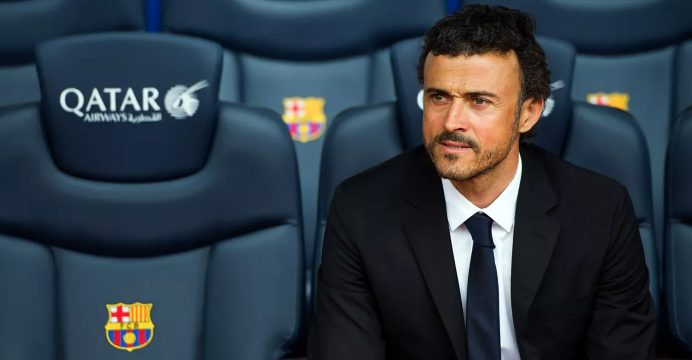 Barcelona manager Luis Enrique urged the club’s fans to create a wild atmosphere in Camp Nou to help the team complete another improbable comeback in the Champions League, this time against Juventus.

The Spanish coach insisted his team will try to score five goals on Wednesday night against the visiting Italians, who have a 3-0 lead from the quarter-final first leg in Turin.

After Barcelona overturned a 4-0 deficit against PSG in the last 16 in the biggest comeback in Champions League history, Luis Enrique believes supporters can play their part as the team tries to obtain another shock result.

“If we score the first goal, the second will be scored by Camp Nou and the third will come by itself,” he said in a news conference on Tuesday.

“Our objective is to score five goals. (We have to) attack, attack, attack. And when we relax a little bit, we have to start attacking again.”

A handful of fans left with Barcelona 3-1 up against PSG on March 8, missing the stunning finale as Barca netted three goals in the last few minutes to knock their opponents out of the competition.

Luis Enrique said they should stay until the end this time, with the team planning to fight until the final whistle to turn the game around.

“I hope they don’t go in the 80th minute… We will try right until the end,” he said.

“Those who experienced the night against PSG at Camp Nou will have another chance to enjoy an historic evening. Right until the 95th minute we have to be united.”

The coach confirmed that Javier Mascherano would be back from injury for the game and said he was happy to have Sergio Busquets available after the defensive midfielder missed the first leg.

“Getting (Busquets) back is always great news,” he said.

“He is one of the most tactically intelligent players there is and a key man for us. The more he can do, the better for us.”

Barcelona captain Andres Iniesta said the team needed to put in its best performance of the season.

“We have to play a perfect match. We have to create the maximum number of chances and score goals. We probably need to play our best match of the season,” he said.