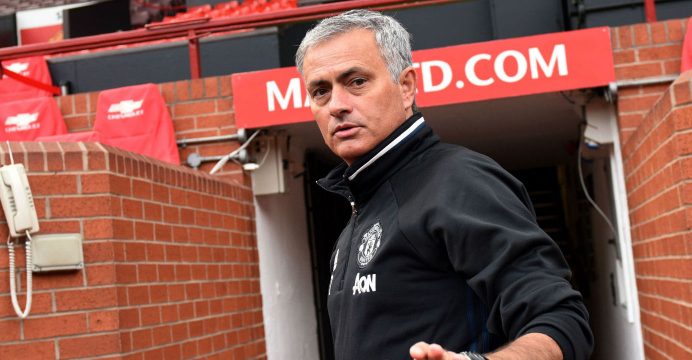 Manchester United manager Jose Mourinho must rally a fatigued and foundering team this weekend as he rekindles an increasingly thorny rivalry with his former club Chelsea, the Premier League leaders.

United have drawn five of their last six home games and go into Sunday’s Old Trafford showdown on the back of a leggy 1-1 draw at Anderlecht in the first leg of their Europa League quarter-final.

They are far from ideal conditions in which to be preparing an ambush of the champions-elect, but despite his protestations that it is “just one more game”, Mourinho is likely to be highly motivated.

Sacked by Chelsea midway through last season’s car-crash title defence, he has had two deeply unpleasant experiences on his two trips to Stamford Bridge this season.

In October, he saw United thrashed 4-0 and made a public show of taking Chelsea manager Antonio Conte to task over his touchline exhortations, accusing the Italian of trying to “humiliate” him.

February’s 1-0 FA Cup defeat was a closer affair, but brought with it barracking from the fans who had once sung his name.

In response to their taunts of “Judas!”, he raised three fingers — one for each of the Premier League titles he won over his two spells as Chelsea manager.

“When they have somebody that wins four Premier Leagues for them, I become number two,” he said after. “Until this moment, ‘Judas’ is number one.”

Mourinho cannot have enjoyed watching the players who seemed to down tools under him thriving under Conte, as typified by the form of Eden Hazard.

Hazard, who played like a ghost under Mourinho last season, will arrive at Old Trafford seeking to reach the milestone of 15 goals in a league campaign for the first time since he signed from Lille in 2012.

For his part, Conte has sought to play down any suggestion of tension between himself and Mourinho.

“I have zero problems (with Mourinho),” he said. “It’s only a sporting competition between him and me.