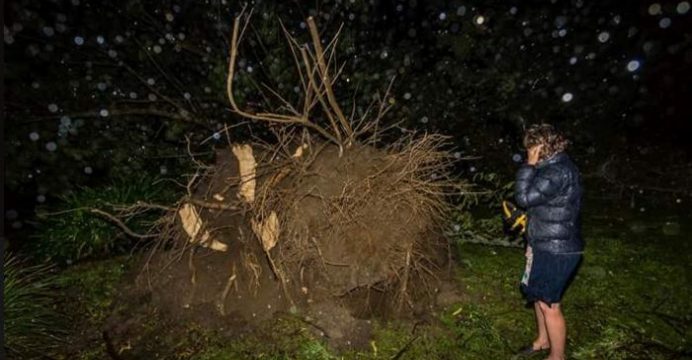 New Zealanders began cleaning up on Friday after a powerful storm swept across the country, forcing families from their homes and leaving a trail of destruction in its wake. The remnants of Cyclone Cook, which battered New Caledonia earlier in the week, struck overnight on Thursday.

It caused widespread power outages and landslides, uprooted trees forcing road closures and disrupted air travel with the eastern coasts of the North and South Islands bearing the brunt of the extreme weather, reports BSS.

“The worst is over,” meteorologist John Crouch at the official Metservice said just before dawn as more than 100 people who had sought shelter at an evacuation center in Whakatane began to return to their homes in the Bay of Plenty region.

The head of Civil Defence, Sarah Stuart-Black, said emergency crews were assessing the damage and it could take two days for the full extent to be known.

“There are still flood waters, there will be challenges in terms of access to those areas, and with power down, it also means that water and wastewater could be affected as well,” she said.

“So it’s still a risky time in that sense so we would still urge people to be really cautious about their activities over the next day or two.”

There were fears it could be the worst storm to hit New Zealand since 1968 when Cyclone Giselle swept a ferry onto rocks in Wellington Harbour, killing 53 people, however initial reports indicated damage was not as severe as expected.

There were reports of roofs ripped off, windows smashed and garden furniture flung through the air and police said many roads were closed disrupting traffic as people headed away for the Easter holiday weekend.

Many areas of the North Island were already sodden after the remnants of Australia’s Cyclone Debbie hit last week, forcing the evacuation of all 1,600 residents in Edgecumbe when the Bay of Plenty township’s main river burst its banks.