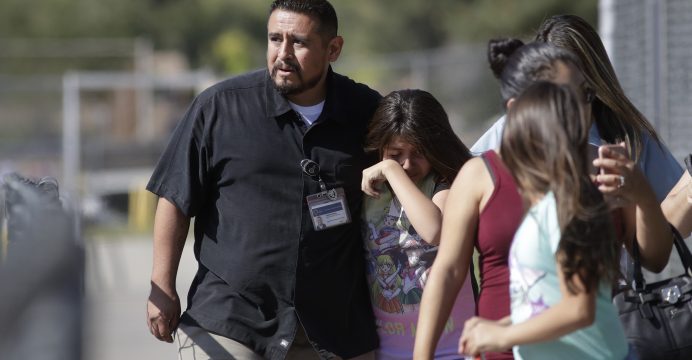 Two adults and a child have been killed in a shooting in a classroom of a primary school in San Bernardino, California, police say.

The suspect shot and killed his estranged wife, a teacher, and wounded two children who were behind her, one of whom died of his wounds.

He then turned the gun on himself, police said.

The gunman, named as 53-year-old Cedric Anderson, had gained entry to the school as a visitor and kept his weapon concealed until he opened fire in the classroom where 15 children with special needs were being taught, authorities said.

He killed his wife Karen Elaine Smith and fatally wounded eight-year-old Jonathan Martinez, who was airlifted to hospital but later died.

A nine-year-old pupil remains in hospital in a stable condition, the Los Angeles Times reported.

Mr Burguan tweeted shortly after the incident that the suspect was “down” and there was “no further threat”. The school was immediately evacuated.