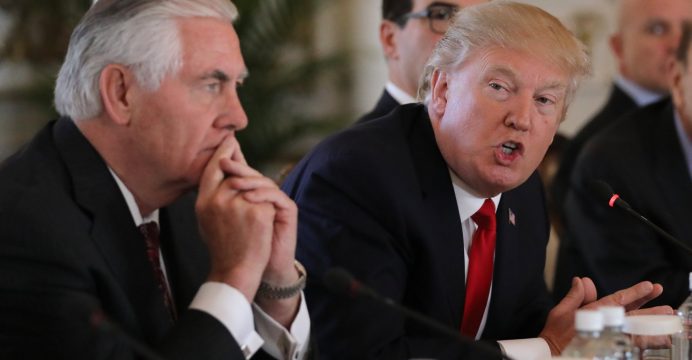 U.S. Secretary of State Rex Tillerson’s visit to Moscow this week will be an early test of whether the Trump administration can use any momentum generated by a missile attack on a Syrian air base to craft and execute a strategy to end the Syrian war.

Even before Trump ordered last week’s strike in retaliation for a nerve gas attack, Tillerson’s visit was certain to be dominated by thorny issues, including Russian interference in the 2016 U.S. election, an apparent violation of an important arms control treaty, and seeing what cooperation, if any, is possible in the fight against Islamic State, reports Reuters.

Now, Tillerson, a former oil executive with no diplomatic experience, is charged with avoiding a major U.S. confrontation with Russia while exacting some concessions from Moscow. Those include getting rid of Syrian President Bashar al-Assad’s remaining chemical weapons and pressing Assad to negotiate Syria’s future.

The Kremlin said on Monday Tillerson was not scheduled to meet with Russian President Vladimir Putin during his visit, a move that could point to tensions.

It may also suggest that Tillerson will instead follow strict diplomatic protocol and only meet his direct counterpart, Russian Foreign Minister Sergei Lavrov. The State Department said last week a meeting had not been confirmed with Putin, who met with Tillerson when the Texan headed Exxon Mobil.

Russia, along with Iran, is Assad’s primary backer, and its intervention in Syria’s war has been crucial to ensuring his grip on power, although no longer over the entire country.

Tillerson said he had not seen hard evidence that Russia knew ahead of time about the chemical weapons attack, which killed at least 70 people, but he planned to urge Moscow to rethink its support for Assad in the April 12 talks.

“I’m hopeful that we can have constructive talks with the Russian government, with Foreign Minister Lavrov and have Russia be supportive of a process that will lead to a stable Syria,” Tillerson told ABC’s “The Week” on Sunday.

“The demonstration of the administration’s willingness to use force has the potential to add some leverage to the diplomacy,” said Antony Blinken, a deputy to former Secretary of State John Kerry.

The U.S. strike – ordered less than three days after the gas attack – could make it clear to Russia that the United States will hold Moscow accountable for Assad, Blinken said.

Tillerson ought to be “very matter of fact” in his meetings, Blinken said, sending Russia a message that: “If you don’t rein him in, we will take further action.”

Tillerson said on Thursday that Russia had “failed in its responsibility” to remove Syria’s chemical weapons under a 2013 agreement, which he argued showed Russia was either complicit with the gas attacks or “simply incompetent.” Securing a Russian commitment on eliminating Assad’s chemical weapons is likely to be first on his agenda, said Evelyn Farkas, a former deputy assistant secretary of defense in the Obama administration.