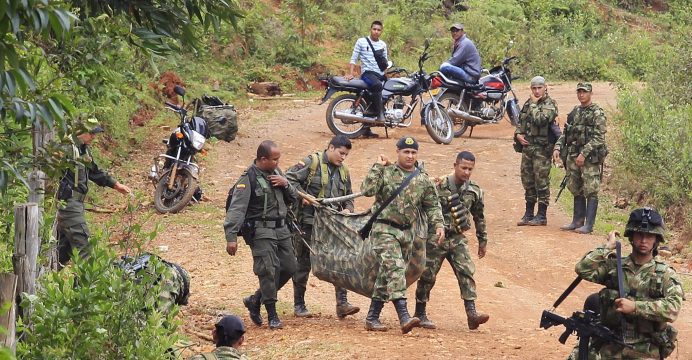 Members of the left-wing Colombian Farc rebel group opposed to last year’s historic peace agreement have killed a soldier in an attack in the south-east of the country, the army has said.

It said that dissidents targeted an army vehicle with an improvised explosive device.

Four other soldiers were wounded.

The attack has been condemned by President Juan Manuel Santos, who last year won the Nobel Peace Prize for his work on the peace agreement.

The deal ended half a century of conflict but renegade Farc fighters have since clashed with other Farc members as well as government forces.

ost Farc members are now inside or heading to one of 26 transition camps dotted around the country. They were set up as part of the historic peace deal which ended more than five decades of armed uprising.

But some Farc leaders have complained that, despite months of planning, most of the transition camps are still lacking the basic amenities they say they were promised.

If the peace process goes to plan, the Farc will transform itself into a political force and its former fighters will re-enter society.

But, for many who have little or no formal education, that may be a huge challenge.