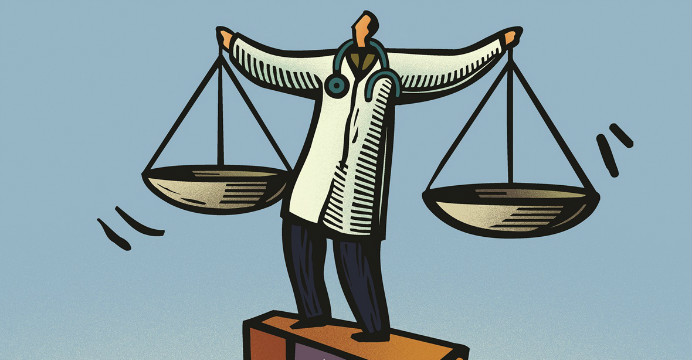 Structural racism, mass incarceration, and the widening income gap between rich and poor all feed growing health inequalities in the USA, which the health care system – by its very design and financing – only helps exacerbate, according to a new five paper Series published in The Lancet.

Published as the new administration approaches its first 100 days in office, the Series highlights the urgent need for broad initiatives to address racism and inequality, as well as health reform that moves towards a single-payer system, to address growing health inequalities in the USA, and prevent a 21st-century health-poverty trap.

Writing in The Lancet, Vermont Senator Bernie Sanders, says: “Healthcare is not a commodity. It is a human right. The goal of a health-care system should be to keep people well, not to make stockholders rich. The USA has the most expensive, bureaucratic, wasteful, and ineffective healthcare system in the world. Medicare-for-all would change that by eliminating private health insurers’ profits and overhead costs, and much of the paperwork they inflict on hospitals and doctors, saving hundreds of billions in medical costs.”

The authors identify two trends during 2001-2014: 1) poverty deepened and 2) poverty became an increasingly important risk factor for poor health. Based on current trends, the authors predict that the gap in life expectancy between the poorest 20% and wealthiest 20% of Americans will increase by nearly a decade in a single generation – from 77 and 82 for the poorest and wealthiest Americans born in 1930, to 76 and 89 for those born in 1960.

Dr Jacob Bor, Boston University School of Public Health, says: “We are witnessing a slow-moving disaster unfolding for the health of lower-income Americans who have spent their working lives in a period of rising income inequalities. Rising economic insecurity among poor and middle-class Americans has led to the persistence of smoking and the rise of obesity and opioid epidemics, with adverse consequences for health and life expectancy. At the same time, paying for health care in the USA today can bankrupt households and impoverish families. The growing link between income and health in the USA has potential to create a health-poverty trap.”

While the Affordable Care Act (ACA) has reduced the number of Americans without health insurance from 48.6 million in 2010 to 28.6 million in 2015, the high cost of co-payments, deductibles and co-insurance still drive many households into debt, even bankruptcy.

The ACA’s Medicaid expansion targeted the poorest Americans, but 19 states – mostly southern states with large minority populations and poor records of health care access – chose to opt out. Even if the ACA were not altered or repealed, an estimated 28 million people would remain uninsured in 2024. Health care access inequalities among income groups are stark – in 2015, 25.2% of poor Americans were uninsured, compared to 7.6% of non-poor Americans.

Dr David Himmelstein, City University of New York, co-founder of Physicians for a National Health Program and lead author of the Series says: “Today, 43 million people in the USA are poor, and although the ACA has nearly halved the number of people without insurance, 29 million Americans, many of them poor or near-poor, remain uninsured. Health inequalities are more entrenched than ever, and rather than address them, the US health care system often exacerbates them. In order to tackle health inequalities in the US, it is essential that we move towards a non-market financing system that treats health care as a human right.”

Dr Adam Gaffney, Cambridge Health Alliance, and Harvard Medical School, says: “Republican proposals focus on market-based reforms that would slash federal funding for Medicaid, replace the ACA’s subsidies with regressive tax credits, and further privatize Medicare. Rather than improve the health inequalities that remain a grave problem even in the era of the Affordable Care Act, this approach would only make things worse. Real reform is now needed to take us towards a universal single-payer system.”