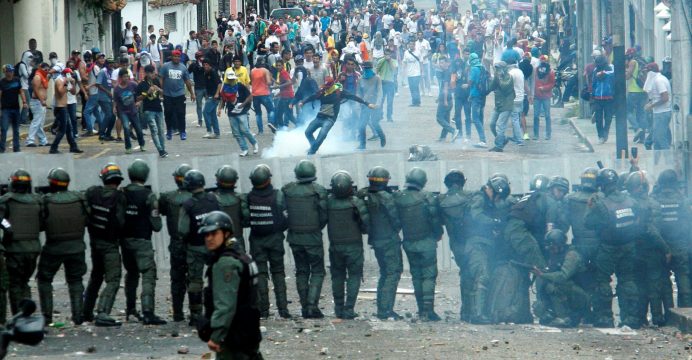 Venezuelan opposition protesters and security officers clashed on Thursday as the country’s fragmented opposition gained new impetus against a socialist government it blames for the country’s social and economic collapse.

The demonstrations were sparked by Supreme Court action last week to assume control of the country’s opposition-led congress in what demonstrators said was a lurch toward dictatorship.

While the widely condemned decision was quickly overturned, the opposition has stepped up street protests against President Nicolas Maduro, despite such demonstrations having achieved little in the past, reports Reuters. Thousands of people blocked a main Caracas highway on Thursday, chanting “Out with Maduro!” and “No more dictatorship!” and vowed to march to the office of the state ombudsman, the government’s principal human rights advocate.

“The human rights advocate has to stop being the Socialist Party advocate!” opposition leader Henrique Capriles said in an online broadcast as he marched wearing a hat in the Venezuelan colors of yellow, red, and blue.

Security forces blocked the march, sparking clashes with dozens of masked youths in a scene repeated over and over again in the past 15 years in volatile Venezuela.

Protesters threw stones and petrol bombs while security officials fired tear gas and dispersed the crowds by mid-afternoon. The opposition called for another nationwide march on Saturday.

Maduro critics are demanding the removal of seven Supreme Court justices who signed last week’s decision. They accuse the government of stalling elections for state governors, which polls suggest would not go well for the ruling Socialists.

State ombudsman Tarek Saab on Thursday evening shot down a censure measure against the Supreme Court justices that had been approved by the opposition-controlled assembly this week, saying the controversial ruling had been “clarified” by the reversal of the decision.

Maduro said in a televised address that authorities had detained 30 people involved in the demonstration.

Three opposition legislators late on Thursday said via Twitter that a young man was killed in a suburb of Caracas by security forces who were breaking up a protest there.

Reuters was unable to independently confirm the incident, and interior ministry officials were not immediately available for comment.

Venezuela is suffering from triple-digit inflation, shortages of basic foods and medicines, and one of the world’s highest murder rates.

Maduro’s government has said that a U.S.-backed business elite is responsible for Venezuela’s economic downturn and that it is trying to foment a coup to impose right-wing rule. His supporters also rallied in Caracas on Thursday.