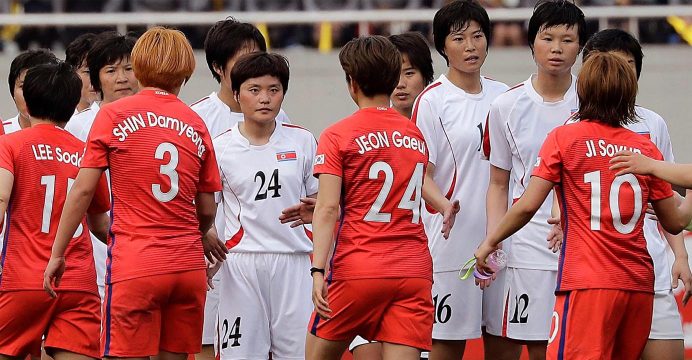 North and South Korea face off on Pyongyang football field

South Korea’s flag will fly in Pyongyang on Friday as its women’s football team takes on their neighbours in the first ever competitive soccer match between the two countries hosted by the North.

The only previous encounter between them in Pyongyang was a pro unification match between the men’s teams in 1990, when both used a flag showing the whole Korean peninsula and their respective anthems were not played. The North won 2-1.

Since then, games nominally hosted in the Democratic People’s Republic of Korea, as the North is officially known, have had to be played on neutral ground due to authorities’ reluctance to see the South’s flag fluttering in their capital.

A few hours south of Pyongyang the North Korean military faces off against US-led United Nations forces across the Demilitarized Zone, considered one of the most heavily fortified locations on Earth.

The match comes as the North’s nuclear ambitions top the agenda at a meeting between US President Donald Trump and his Chinese counterpart Xi Jinping after Pyongyang’s latest missile launch this week in violation of UN resolutions and condemned by the Security Council.

The two Koreas are technically in conflict after the 1950-53 Korean war ended with an armistice rather than a peace treaty, and relations have plunged in recent months.

But the Group B qualifier for the AFC Women’s Asian Cup offers a rare chance for a moment of detente between the two.

A feverish atmosphere is expected at the Kim Il-Sung stadium, opposite a huge triumphal arch erected close to the site of the first speech by the North’s founding father after his return following Japan’s surrender at the end of the Second World War.

The South’s coach Yoon Duk-Yeo — who was on the losing side in the 1990 unification game reportedly installed loudspeakers at a training ground to replicate the expected aural barrage.

Seoul demanded security guarantees for the players before authorities approved the trip.

Even so, when the South’s anthem was played before their first match against India, 5,000 North Korean fans stood up, South Korean reports said.

“Singing the national anthem is always special when you’re representing the country, but today, it was really special,” midfielder Lee Min-a was quoted as saying.