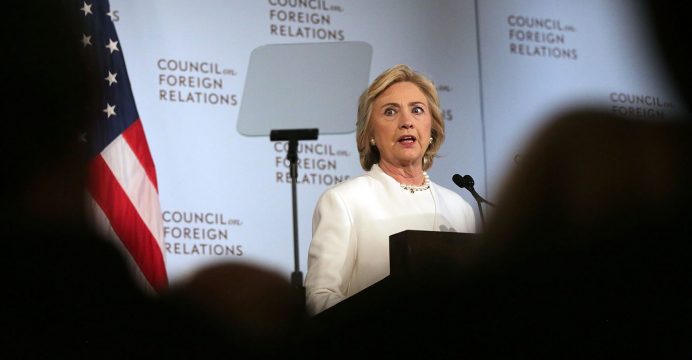 In her first interview since her stunning presidential election defeat by Republican rival Donald Trump, Hillary Clinton on Thursday called for the United States to bomb Syrian air fields.

Clinton, in an interview at the Women in the World Summit in New York, also called Russian interference in the 2016 presidential election a theft more damaging than Watergate.

Asked whether she now believes that failing to take a tougher stand against Syria was her worst foreign policy mistake as secretary of state under President Barack Obama, Clinton said she favored more aggressive action against Syrian President Bashar al-Assad, reports Reuters.

“I think we should have been more willing to confront Assad,” Clinton said in the interview, conducted by New York Times columnist Nicholas Kristof.

“I really believe we should have and still should take out his air fields and prevent him from being able to use them to bomb innocent people and drop sarin gas on them.”

Clinton noted that she had advocated for a no-fly zone in Syria after leaving government, something that Obama opposed.

Her remarks came two days after a poison gas attack in Syria that killed at least 70 people, many of them children. The U.S. government believes the chemical agent sarin was used in the attack. The United States and other Western countries blamed Assad’s armed forces for the worst chemical attack in Syria in more than four years.