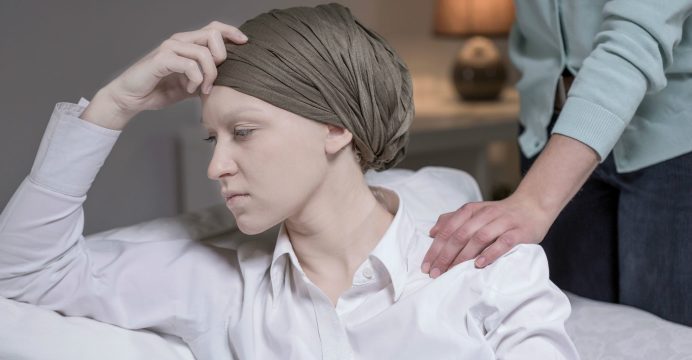 Patients with cancer are more likely to die by suicide

New research presented at this year’s European Congress of Psychiatry (EPA) in Florence, Italy (April 1-4), shows that patients with cancer are more likely to die by suicide than those without cancer.

Previous research has examined suicide rates in cancer patients, finding them to be higher than those in the general population. In this study, the authors performed a meta-analysis to pool data from several sources to calculate the size of this increased risk.

They searched MEDLINE, PsycINFO, and the Cochrane Library to identify articles published before July 1, 2016, examining the association between any form of diagnosed cancer and suicide [death (SD), attempt (SA), and ideation (SI – when a person has suicidal thoughts)].

Their search provided a shortlist of 104 publications of which 15 were included in the meta-analysis. Included articles reported rates of any form of suicidal thoughts or behavior (SD, SA and SI) for both participants having received a diagnosis of cancer and participants without a diagnosis of cancer. Included articles were published between 1983 and 2015 from multiple countries.

According to these preliminary analyses, patients with cancer had a 55% higher risk of SD (seven studies, 247,978 participants) compared with those without cancer (among case-control studies focused on SD versus living controls representative of the general population).

The authors underline that these analyses are the first stage in their work since they are currently performing further analyses on a higher number of included studies (more than 30) and they are planning to control for confounders, not considered in their first analyses, and to perform further analyses on subgroups of studies.

However, the authors expect the new studies to support the finding of an increased risk of suicide in cancer patients, and their key message remains the same: “The assessment of suicide risk in patients with cancer is crucial. We suggest there is a need in cancer patients to screen and care not only for anxiety and depression but also specifically for those people with suicidal thoughts and a lifetime history of suicide attempts, in particular during the period immediately subsequent to the diagnosis of cancer.”