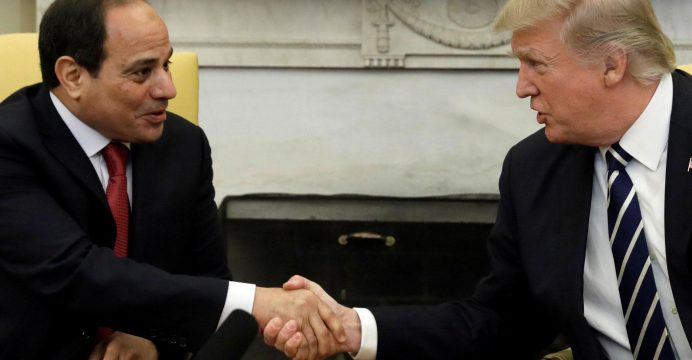 Donald Trump says US is ‘very much behind’ Egypt’s Sisi

US President Donald Trump on Monday put concerns about Egypt’s human rights abuses aside as he welcomed Egyptian President Abdel Fattah el-Sisi to the White House.

Ahead of the meeting, senior US officials had said the issue of human rights violations in Egypt would not be addressed publicly during Sisi’s visit, which was widely condemned by rights groups and protesting campaigners.

Speaking to reporters after their meeting, Trump said he strongly backed Sisi’s leadership and that they would work together to fight against “terrorism”.

“I just want to let everybody know that we are very much behind President Sisi; he has done a fantastic job in a very difficult situation,” Trump said.

“You have a great friend and ally in the United States – and in me,” Trump told Sisi, the first Egyptian president to visit the White House in almost a decade.

For his part, Sisi said he appreciated that Trump has been “standing very strong … to counter this evil ideology”.

Egypt is battling an internal conflict in Sinai, and hundreds of Egyptian soldiers and police have been killed fighting armed groups.

Cairo and Washington are expected to forge closer ties under Trump following years of tension under the administration of ex-President Barack Obama.

“Sisi believes such a visit to the Oval Office will enhance his legitimacy, which has been a question of doubt because of the way he took over power through a bloody coup d’etat.”

Since the July 2013 coup, a police crackdown against the Muslim Brotherhood – which maintains it is peaceful but has been designated by Egypt’s government as a “terrorist” group – has left hundreds dead and tens of thousands in jail.

Last year, a UN investigation found that Egypt engages in the continuous persecution of women, human rights activists and journalists.

Human rights groups estimate that at least 40,000 political prisoners have been detained by Sisi’s government.

“Inviting Sisi for an official visit to Washington as tens of thousands of Egyptians rot in jail and when torture is again the order of the day is a strange way to build a stable strategic relationship,” Sarah Margon, Washington director at Human Rights Watch, said ahead of the meeting.

The White House said Egypt’s human rights record would be raised behind closed doors, but some analysts raised doubts about the US administration’s commitment to focus on the issue.

“I don’t think [overall] it will be addressed because I think the Trump administration is for these types of policies that incarcerate ‘Islamists’ in a place like Egypt and other activists who have been against the Sisi government,” Marwan Bishara, Al Jazeera’s senior political analyst, said.

“The repression in Egypt is, really, unforgivable but the Trump administration is more than happy to do so,” he added.

“At the end of the day, the US administration, including under Obama and [George W.] Bush, would not make Egypt an enemy because of human rights – if anything, human rights have always been sidelined in favour of security and other cooperations between the US and Egypt. In fact, between the US and most totalitarian regimes in the Middle East, state interest and security has always trumped human rights.”