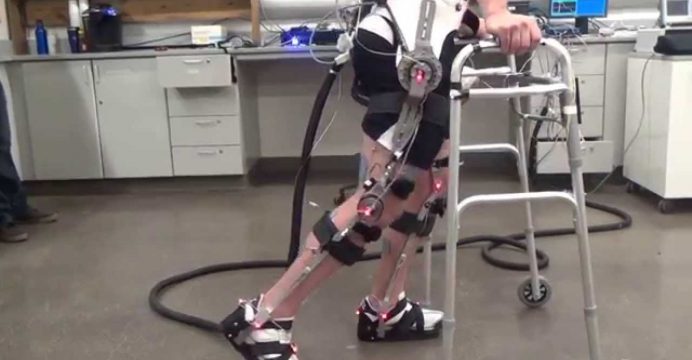 A man who was paralyzed from the shoulders down has been able to feed himself and drink as a result of a novel neuro-prosthesis which reconnects his brain with his muscles.

A system that decodes brain signals and transmits them to sensors in the arm has allowed a man paralyzed from the shoulders down to regain movement in his hand and arm, according to the first study to report results for this new technology, published in The Lancet.

Although only tested with one participant, the study is a major advance and the first to restore brain-controlled reaching and grasping in a person with complete paralysis. The technology, which is only for experimental use in the USA, circumvents rather than repairs spinal injuries, meaning the participant relies on the device being implanted and switched on to move. 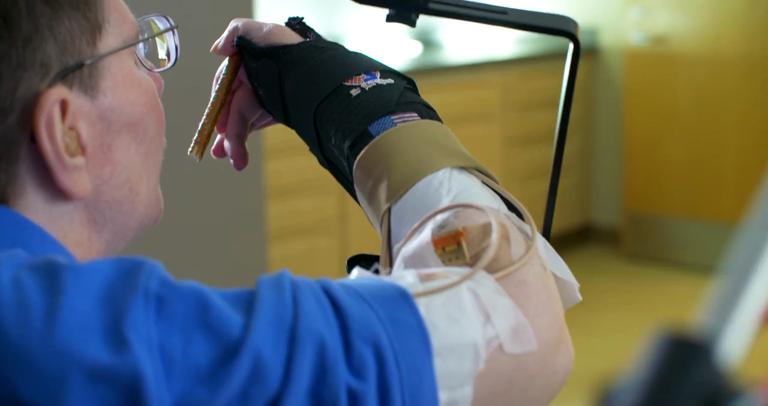 “Our research is at an early stage, but we believe that this neuro-prosthesis could offer individuals with paralysis the possibility of regaining arm and hand functions to perform day-to-day activities, offering them greater independence,” said lead author Dr Bolu Ajiboye, Case Western Reserve University, USA.

“So far it has helped a man with tetraplegia to reach and grasp, meaning he could feed himself and drink. With further development, we believe the technology could give more accurate control, allowing a wider range of actions, which could begin to transform the lives of people living with paralysis.”

Injuries to the spinal cord often cause loss of muscle function and paralysis, with injuries affecting the vertebrae in the neck region usually causing full paralysis of all four limbs.

Previous research has used similar elements of the neuro-prosthesis. For example, a brain-computer interface linked to electrodes on the skin has helped a person with less severe paralysis open and close his hand, while other studies have allowed participants to control a robotic arm using their brain signals. However, this is the first to restore reaching and grasping via the system in a person with a chronic spinal cord injury.

In this study, a 53-year-old man who had been paralyzed below the shoulders for eight years underwent surgery to have the neuro-prosthesis fitted.

This involved brain surgery to place sensors in the motor cortex area of his brain responsible for hand movement – creating a brain-computer interface that learned which movements his brain signals were instructing for. This initial stage took four months and included training using a virtual reality arm.

He then underwent another procedure placing 36 muscle stimulating electrodes into his upper and lower arm, including four that helped restore finger and thumb, wrist, elbow and shoulder movements. These were switched on 17 days after the procedure and began stimulating the muscles for eight hours a week over 18 weeks to improve strength, movement and reduce muscle fatigue.

The researchers then wired the brain-computer interface to the electrical stimulators in his arm, using a decoder(mathematical algorithm) to translate his brain signals into commands for the electrodes in his arm. The electrodes stimulated the muscles to produce contractions, helping the participant intuitively complete the movements he was thinking of. The system also involved an arm support to stop gravity simply pulling his arm down.

During his training, the participant described how he controlled the neuro-prosthesis: “It’s probably a good thing that I’m making it move without having to really concentrate hard at it. I just think ‘out’ and it just goes.”

After 12 months of having the neuro-prosthesis fitted, the participant was asked to complete day-to-day tasks, including drinking a cup of coffee and feeding himself. First of all, he observed while his arm completed the action under computer control. During this, he thought about making the same movement so that the system could recognise the corresponding brain signals. The two systems were then linked and he was able to use it to drink a coffee and feed himself.

He successfully drank in 11 out of 12 attempts, and it took him roughly 20-40 seconds to complete the task. When feeding himself, he did so multiple times – scooping forkfuls of food and navigating his hand to his mouth to take several bites.

“Although similar systems have been used before, none of them have been as easy to adopt for day-to-day use and they have not been able to restore both reaching and grasping actions,” said Dr Ajiboye.

“Our system builds on muscle stimulating electrode technology that is already available and will continue to improve with the development of new fully implanted and wireless brain-computer interface systems. This could lead to enhanced performance of the neuro-prosthesis with better speed, precision and control.”

At the time of the study, the participant had had the neuro-prosthesis implanted for almost two years (717 days) and in this time experienced four minor, non-serious adverse events which were treated and resolved.

Despite its achievements, the neuro-prosthesis still had some limitations, including that movements made using it were slower and less accurate than those made using the virtual reality arm the participant used for training. When using the technology, the participant also needed to watch his arm as he lost his sense of proprioception – the ability to intuitively sense the position and movement of limbs – as a result of the paralysis.