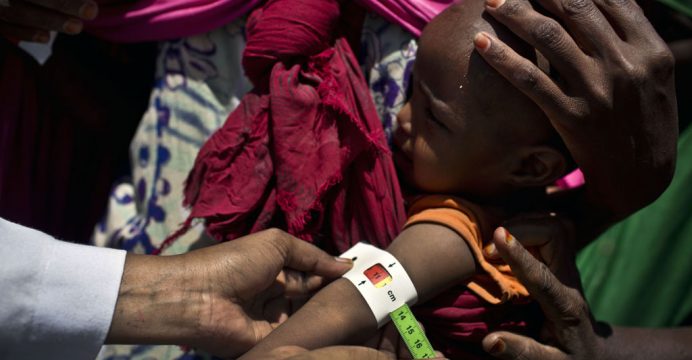 As famine looms, malnutrition and disease rise sharply among children in Somalia

As the spectre of famine hangs once again over Somalia, early numbers show an increasing number of children suffering from severe acute malnutrition (SAM) and cholera or acute watery diarrhoea (AWD) — a combination that killed many children in the famine of 2011.

More than 35,400 children suffering from SAM were treated with life-saving therapeutic food at hundreds of nutrition centers across Somalia in January and February, a 58 percent increase over the same period in 2016. As of 28 March, more than 18,400 cases of cholera / AWD had been reported since the beginning of the year, far surpassing the 15,600 cases reported in all of 2016. The majority of the cases are among young children.

“These numbers are a wake-up call,” said Leila Pakkala, UNICEF Regional Director for Eastern and Southern Africa, after speaking with displaced families and patients at a cholera treatment center in Baidoa, Somalia.

“Children are dying from malnutrition, hunger, thirst, and disease.  During the 2011 famine, around 130,000 young children died, about half of them before famine was declared. We are working with partners around the clock to make sure that doesn’t happen again.”

There are no precise figures currently available for the number of children who have died due to hunger or malnutrition, in part because many succumb to disease and infection. But children suffering from SAM are nine times more likely to die of the disease than a well-nourished child. During the 2011 famine, the biggest killers were diarrhoea and measles.

Six years since famine was declared in parts of south-central Somalia, the country is once again on the brink of catastrophe. This time the drought is more widespread, affecting Somaliland, Puntland and pastoral areas of Somalia, in addition to the center and southern parts of the country, which were hardest hit in 2011. The numbers of people at immediate risk are greater, and children are among the worst affected.

In February, UNICEF projected that 944,000 children would be acutely malnourished in 2017, including 185,000 children suffering from SAM who would need urgent, life-saving support. That number could shoot up, even if the next rains due to start in April come on time, and in full.

UNICEF and partners have secured the pipeline of lifesaving supplies through June and are implementing a massive scale up plan. UNICEF is working to extend the reach of both facility-based and mobile nutrition, water, sanitation and health services, and has teams in the hardest hit areas, working with local authorities, partners and communities to treat and prevent malnutrition and AWD / cholera.

UNICEF Somalia has raised its 2017 funding requirement from $66 million to $147 million, with a funding gap of 54 per cent as of mid-March.