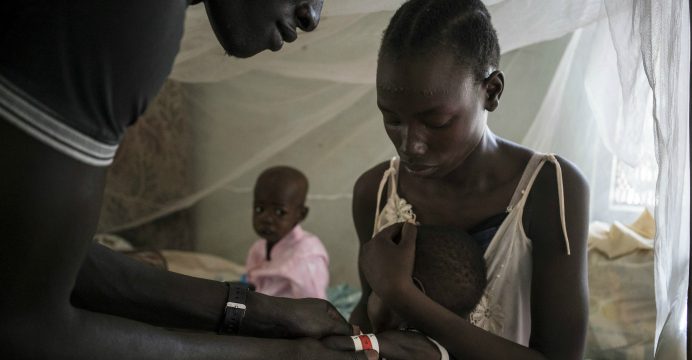 Time is running out for children as famine, drought and war threaten millions

More than a month after famine was declared in South Sudan, time is running out for more than a million children as drought and armed conflict devastate lives in northeast Nigeria, Somalia, South Sudan and Yemen, UNICEF said.

“Children can’t wait for yet another famine declaration before we take action,” said Manuel Fontaine, UNICEF Director of Emergency Programmes.

“We learned from Somalia in 2011 that by the time famine was announced, untold numbers of children had already died. That can’t happen again.”

Some 22 million children have been left hungry, sick, displaced and out of school in the four countries, UNICEF said. Nearly 1.4 million are at imminent risk of death this year from severe malnutrition. 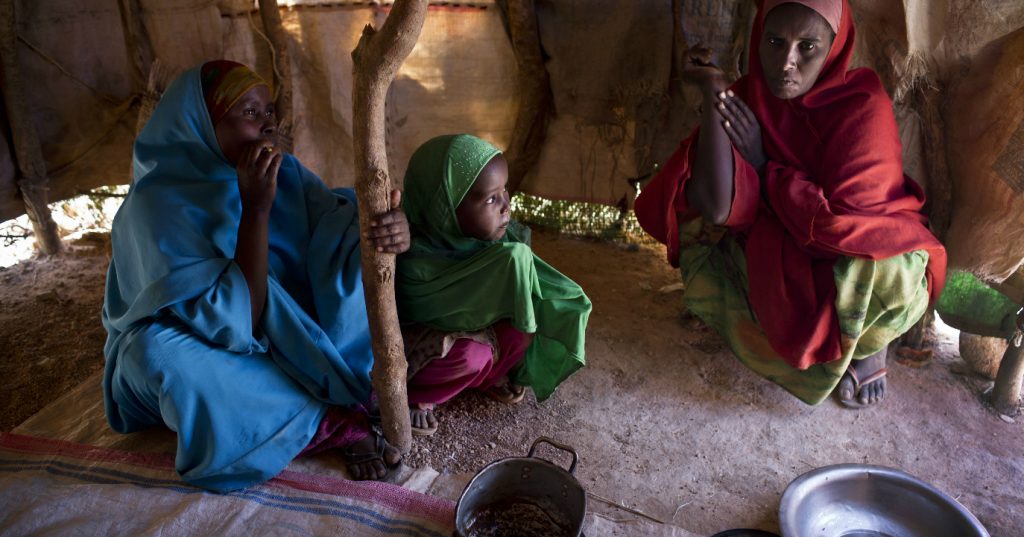 (Right) Amina Dahir, her daughter and sister sit for photographs inside their makeshift home at a settlement near the town of Ainabo, Somalia * PHOTO CREDIT – UNICEF

UNICEF will require close to $255 million to provide these children with food, water, health, education, and protection services for just the next few months, according to a new funding update.

Most of the funds – over $81 million – will go towards nutrition programs to screen children for malnutrition and provide them with therapeutic food.

An additional $53 million will be allocated to health services including vaccinations, while over $47 million will go to water, sanitation and hygiene programs to prevent potentially deadly diahorreal diseases.

The remaining funds will help protect children affected by conflict and displacement and provide them with education services. Cash assistance will also be offered to the most vulnerable families.

The resources needed over the next few months are part of a broader appeal for all of 2017, totaling $712 million – a 50 percent increase over funding requirements in the four countries at the same time last year.

UNICEF has been working with partners in the four countries to respond to the famine threat and prevent it from spreading:

• In Somalia, UNICEF is supporting 1.7 million children under-five years of age, including the treatment of up to 277,500 severe acute malnutrition cases through facility-based and mobile health and nutrition services.

• In South Sudan, UNICEF, together with partners, has delivered life-saving assistance to 145,000 people in areas affected or threatened by famine, including 33,000 children under the age of five.

• In Yemen, UNICEF has scaled up activities to respond to malnutrition through health facilities, mobile teams, community health workers and volunteers reaching hard-to-access communities and displaced families. UNICEF is also supporting severely acutely malnourished children and their families with cash assistance and water and sanitation services, including the provision of safe water, supplies, and hygiene promotion.

Armed conflict is a major driver of this crisis, UNICEF said, calling for unconditional, unimpeded and sustainable access to the children in need and an end to the violations of children’s rights in the affected countries. UNICEF also sounded the alarm about a worsening nutrition situation in neighboring countries.

“As violence, hunger and thirst force people to move within and across borders, malnutrition rates will continue to soar not just in these four countries, but also in the Lake Chad basin and the Greater Horn of Africa,” Fontaine said. “If humanitarian agencies do net get the access and resources they need to reach the most vulnerable, lives will be lost.”