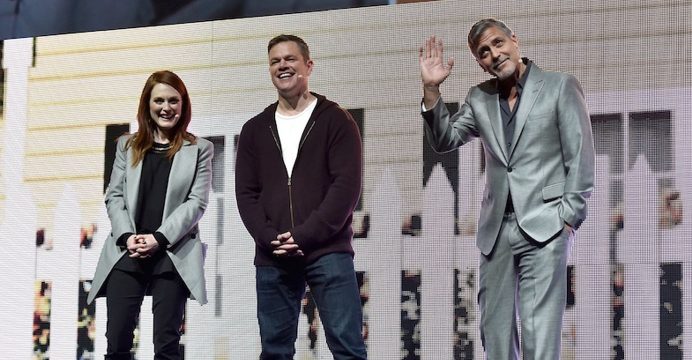 Paramount rolled out its big guns Tuesday as it enlisted an array of Hollywood’s finest from George Clooney to Matt Damon to present its movies for the coming year.

The studio’s presentation proved the most star studded so far of CinemaCon in Las Vegas, and at times most cringeworthy, as a role call of A-listers reeled off prepared jokes to introduce their movies.

Paramount the third studio to present at the annual conference for theater operators after Sony and STX launched its presentation with Dwayne Johnson, Zac Efron and the rest of the cast of the upcoming “Baywatch.”

The jokes in a mix of already-trailed and first-look footage landed better than the cast’s onstage banter, surrounded by 20 scantily clad models in “Baywatch” beachwear.

“I give you the Avengers of the Beach, Team Baywatch,” Johnson declared to the packed theater at Caesar’s Palace as he called up Efron, Jon Bass,Alexandria Daddario, and Priyanka Chopra.

The tone got more serious as former vice president Al Gore made a surprise appearance to unveil a scene from “An Inconvenient Sequel: Truth to Power,” his follow-up to his own groundbreaking climate change documentary (2006).

“Ten years ago ‘An Inconvenient Truth’ proved that movie theaters can be powerful engines of change… The power of entertainment to inform us has made us more socially aware, and its ability to inspire us has driven unprecedented activism,” he said.

Clooney, Damon and Moore took the stage next to present footage from “Suburbicon,” providing the first genuinely comedic moment of the afternoon.

“We knocked over a few casinos here, haven’t we?” joked Clooney, sparking laughter from the Las Vegas crowd, before asking Damon: “What was it like to be directed by Batman?”

Clooney who directed the noir thriller from a script by the Coen brothers cheekily berated Paramount along with Damon for its decision to release “Suburbicon” on November 3, the same day “Thor: Ragnarok” hits theaters.

“I’m Thor, if I don’t use my thaddle. Theriously,” replied Damon.

Damon was back onstage later with director Alexander Payne to introduce the first footage of “Downsizing,” a comedic satire based in a world where people can be shrunk down to save on household bills.

A ten-minute skit showing Damon being shaved and not just his face before the being medically shrunk drew perhaps the most positive reaction of the afternoon from the audience.

Paramount announced a tie-in with Viacom stable mate Nickelodeon, which will see the studio release animated movie “Amusement Park” in 2018 before the kids’ TV network turns it into a show the following year.

Finally, Anthony Hopkins, Mark Wahlberg and other cast members from “Transformers: The Last Knight” were sent on with director Michael Bay to discuss the technological advances which went into making the movie.

Bay has often said that the next movie in the franchise would be his last but admitted that he kept “getting drawn back in.”

“This is not a number five. This feels like a brand new, fresh look into the Transformers,” he added.

Hopkins was asked about his strategy for dealing with the famously manic Bay, and described the director as a “speedy Gonzales” who doesn’t have time to talk.

“It’s extraordinary. I heard rumors. I heard stories. I showed up on the first day. Do what he tells you. Obey orders. That is the way to do it,” Hopkins said.