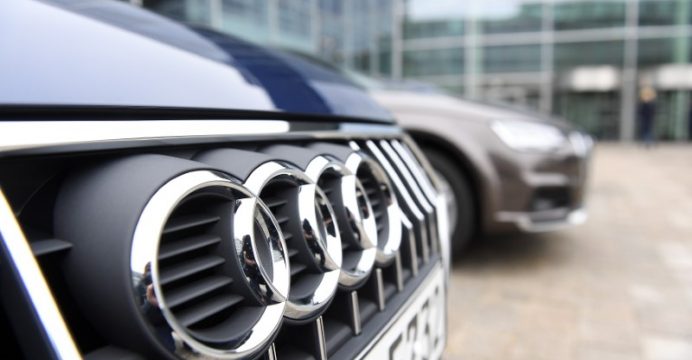 Labor leaders at Volkswagen’s luxury Audi brand have asked top management to assign production of an all-electric model to the carmaker’s main plant in Germany, concerned they might lose out as electric cars gain in importance.

Audi will next year start building its first mass-produced electric model, the e-tron Quattro sport-utility vehicle, at a plant in Brussels, together with batteries that will also be used in other VW group electric vehicles (EVs), reports Reuters.

Volkswagen’s (VW) main profit contributor plans to launch three all-electric models by 2020 and workers at Audi’s main plant in Ingolstadt don’t want to be left behind in the race for production.

The logo of German car manufacturer Audi is seen at a building of a car dealer in Duebendorf, Switzerland

“Our core factory must be prepared further for the future,” Audi’s top labor representative, Peter Mosch, told a gathering of 7,000 workers on Wednesday at the Ingolstadt plant which employs about 43,000 people.

“None of our colleagues must fall off the conveyor belt as we move into the future,” deputy works council chief Max Waecker said.

Chief Executive Rupert Stadler has previously said Audi’s smaller German plant in Neckarsulm where 16,000 workers assemble the higher-end A6, A7 and A8 models, will start making battery-only vehicles from about 2020.

Mosch, who sits on parent VW’s supervisory board, asked top management to provide specific information as to how the growing shift to electric cars and digital services will affect employment at Audi, which has 88,000 workers globally.

Audi has previously been reluctant to embrace all-electric drive technology but the success of Tesla and arch-rival BMW’s “i” series of electric cars has convinced Audi there is a market for electric luxury vehicles after all.

Daimler on Wednesday also said it was accelerating its electric car program. Audi’s e-tron Quattro, powered by three electric engines, is expected to run for over 500 km (311 miles) per charge based on a 95 kWh battery pack that can be fully recharged in about 50 minutes.