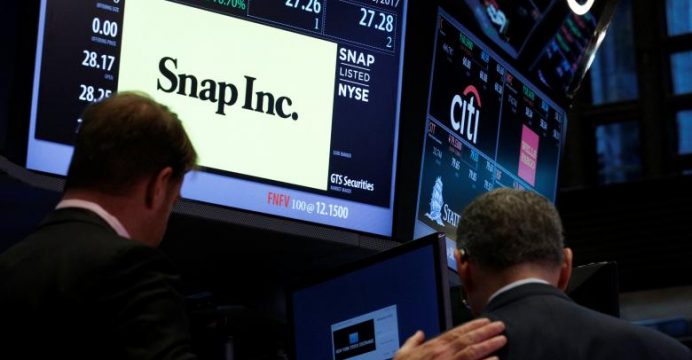 Snap Inc, owner of messaging app Snapchat, received top ratings from a number of its IPO underwriters on Monday, sending its shares up more than 3 percent in premarket trading.

Snap had a red-hot debut on March 1 in what was the largest listing by a technology firm in three years. However, many investors have been critical of the company’s lack of profitability and decelerating user growth.

At least six brokerages, including Morgan Stanley and Goldman Sachs, rated the stock “buy” or higher, citing the company’s long-term growth in a highly competitive market.

As of Friday’s close, the stock had risen nearly 34 percent from its $17 initial public offering price. The stock was trading at $23.52 before the bell on Monday.

The Los Angeles-based company’s app, which allows users to share short-lived messages and pictures, is popular with young people but faces intense competition from larger rivals such as Facebook Inc’s Instagram. Snap has warned it may never become profitable.

The analysts also said that Snap’s ad monetization was still in its infancy. Among other underwriters, Jefferies, RBC, Cowen & Co and Credit Suisse rated the stock a “buy”. RBC was the most bullish with a $31 price target.

“The big question is whether SNAP’s user base can “age up”,” analysts at Cowen & Co said in a note.