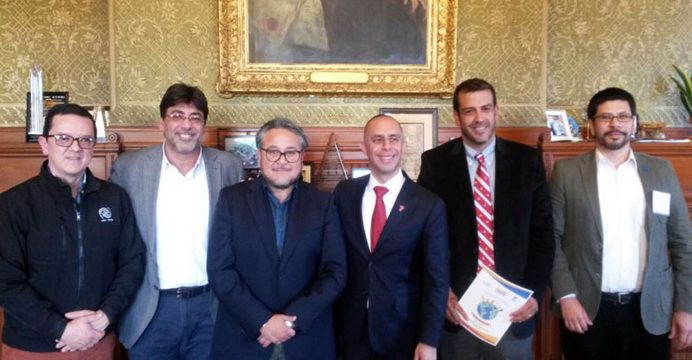 This week, three Chilean mayors are in the United States as part of the State Department’s International Visiting Leaders Program (IVLP), during which they will exchange best practices for migrants’ social inclusion. IVLP’s objective is to share first-hand knowledge of society, culture and politics in the United States, connecting foreign leaders with their US counterparts.

IOM Chile representatives are taking part in the study visit, as part of the mission’s work with local governments under the Migrants and Cities programme.

The exchange – organized by the US Embassy in Chile – in which mayors Rodrigo Delgado (municipality of Estación Central); Juan Carrasco (Quilicura); and Daniel Jadue (Recoleta) are participating, is taking place in Houston, Texas and Providence, Rhode Island.

The Chilean mayors are expected to learn about Houston and Providence’s experiences of creating local policies conducive for migrants’ social inclusion. They will also discuss the progress and challenges related to their local initiatives in Chile around themes such as migrant health, education and access to employment.

The exchange of best practice tips will support and strengthen municipal efforts to improve migrants’ self-sufficiency and integration, and reinforce public policy for social inclusion in the country.

“We are convinced that migrants are great contributors and we are developing a series of migration policies, such as creating the Multicultural Office, where we offer legal, social, educational and economic support with job training and workshops,” explained Mayor Delgado. “Those are some of the good practices that we are sharing.”

Norberto Girón, IOM Chile Chief of Mission, explained that “this exchange of good practices on social inclusion will help the mayors understand other migration realities and give them ideas to better support the integration and social inclusion of migrants.”

According to the National Socioeconomic Characterization Survey of 2015, from the Ministry of Social Development, migrants represent 2.7 percent of Chile’s total population. Of this figure, 69.1 percent are concentrated in the Metropolitan Region, reaching 4.6 percent of the regional population. According to the Municipalities of Recoleta and Estación Central, the estimated migrant population is 11.8 percent and 4.7 percent respectively. The migrants are mostly from Peru, Bolivia, Colombia, Haiti, Ecuador and Venezuela.