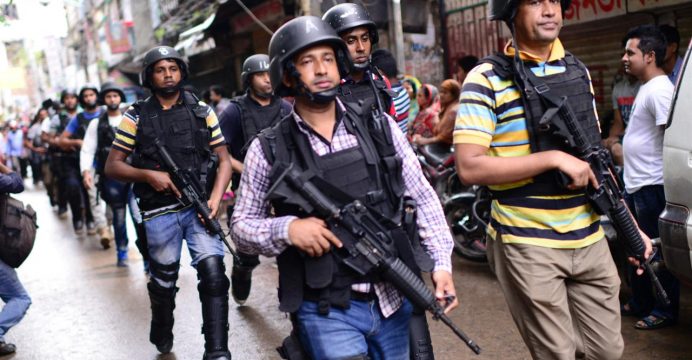 An army spokesperson said that they have rescued 78 civilians from the building where the suspected militants were holed up since early on Friday.

“The raid is yet to end,” Brig Gen Md Fakhrul Ahasan told the media.

Troops from the Para-Commando Battalion began the assault, christened ‘Operation Twilight,’ to round off a 30-hour siege against  a complex housing two buildings — a five-storey and a four-storey — at  Shibbarhi on the outskirts of Sylhet city at 9am.

Thirty minutes before the assault mediapersons and others in the area were asked to move at least a kilometre away from the complex and utility connections to buildings were cut off.

Intense exchanges of fire interspersed with intermittent explosions could be heard in phases from the spot throughout the raid.

No details were available throughout the day as no one from the army or the law enforcement agencies spoke to the media after the assault began.

Around 5:45pm, an army officer told the media that a briefing would be held shortly.

The army took charge of the operations in the morning after a second commando team arrived at the scene.

The assault began at 9am. Until 2pm, gunfire was heard twice from the scene, but the exchanges of fire intensified afterwards and explosions rocked the area.

At least eight explosions were heard between 2pm and 3pm. Police officers outside the complex said the loud explosions could be grenades that the militants may have lobbed.

Three injured soldiers were seen being carried away for medical treatment around 2:30am.

The continued blasts and gunshots stopped after 3pm. Bursts of gunfire could be heard for the next two hours.

Two blasts were heard around 5pm and were followed by continuous firing, which lasted for the next 40 minutes, and then stopped.

It was then that an army officer came to the media and said that a briefing would be held.

Around 6:30pm Brig Gen Ahasan emerged before the media and said that their operation was still continuing. “As many as 78 civilians have been rescued from the building.”