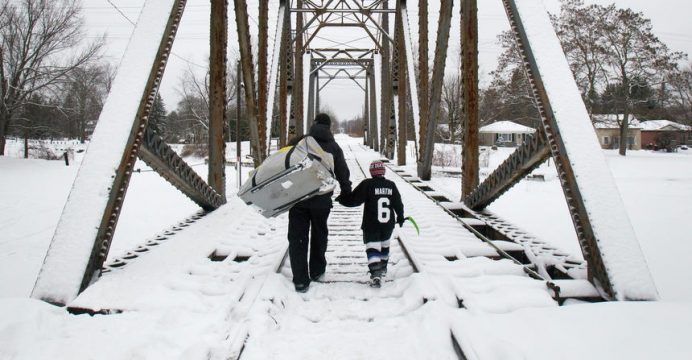 Injuries fell by half and concussions were reduced by almost two thirds after Hockey Canada banned body checking for players younger than 13 years old, researchers say.

“Concussions are among the most commonly-occurring injuries in youth recreation, and although many recover quickly, some experience ongoing symptoms,” said study author Kathryn Schneider of the University of Calgary Sport Injury Prevention Research Center in Alberta.

“The goal is to reduce the public health impact of this by preventing injuries from the start,” she told reporters.

About half a million youth in the U.S. and Canada are registered in ice hockey leagues each year, the researchers write in British Journal of Sports Medicine. Past research has identified body-checking – slamming into an opponent in an effort to separate them from the puck – as a major source of injuries, they add.

In 2013, Hockey Canada disallowed body checking in Pee Wee leagues made up of 11- and 12-year-olds, postponing its introduction to the Bantam league, made up of 13- and 14-year olds. To see how the new policy affected injuries, the research team looked at records for the 2011-2012 season, before the change, and for the 2013-2014 season that followed the change.

In the second time period, there were 48 injuries, or 2.16 per 1,000 game-hours, and 25 concussions, or 1.12 per 1,000 game-hours. Before the policy change, body checking was the most common cause of injury, whereas afterward it was “accidental contact.”

“Anytime there’s a new policy change, it’s important to study the effect of that change and ensure there are no unintended negative consequences,” said Dr. M. Alison Brooks of the University of Wisconsin in Madison, who wasn’t involved with the study.

“This research group has a historic longitudinal perspective with these ice hockey players and is a well-known, experienced team,” Brooks told Reuters Health. “They do groundbreaking work in this area, and I always have great confidence that it’s high quality data.”

In addition, Hockey Canada has discussed moving the body checking age even higher to 15, 16 or 17. The Canadian Pediatric Society has recommended delaying body checking until age 15.

Supporters argue that the change would keep kids safer longer, especially if they participate recreationally and don’t plan to play ice hockey at collegiate or professional levels. Critics say kids need to learn body checking as a fundamental skill, which can prevent injuries if learned early.

“With this policy change in Canada, I expect to see the sport grow exponentially as more people are willing and interested in having their kids play in a lower-risk environment,” Brooks said.

USA Hockey delayed the introduction of body checking until ages 13 and 14 in 2012. USA Hockey’s American Development Model introduces basic body contact around age 8 and recommends that players feel confident and trained by ages 11 and 12 in how to use their body to protect or take the puck.