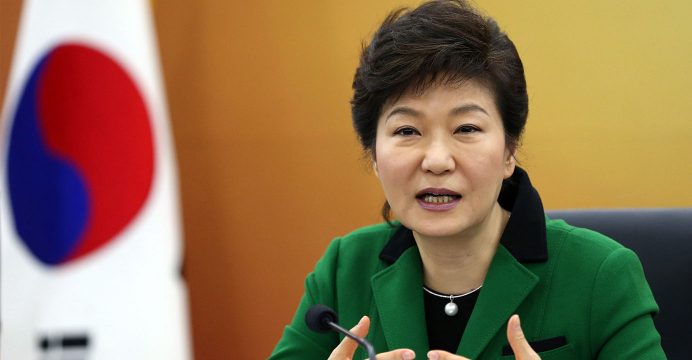 Ousted South Korean president Park Geun-Hye was questioned by prosecutors Tuesday over the corruption and abuse of power scandal that brought her down, after using executive privilege to avoid them for months while in office.

Park apologised to the public as she arrived at the prosecutors’ office in Seoul, adding: “I will undergo the investigation sincerely.”

South Korea’s first female president, Park was impeached by parliament in December as millions of people took to the streets to demand her removal over the sprawling scandal, which has exposed the links between politics and business in Asia’s fourth-largest economy.

Her dismissal was confirmed by the country’s top court earlier this month, ending the political career of a woman who grew up in the presidential palace as the daughter of army-backed dictator Park Chung-Hee.

A private citizen once again, Park’s convoy drove at walking pace through crowds of flag-waving supporters lining the street outside her home – – some of them lying on the pavement to try to block her exit before she left.

Every inch of the journey was covered live on television, with cameramen trailing the vehicles in cars and on motorcycles, and at fixed points along the route.

Questioning by prosecutors is a key step in South Korea’s judicial process before a suspect is charged. It can last for many hours, late into the night and can be repeated if officials deem it necessary.

Park faced two prosecutors and an investigator, and was accompanied by one of her lawyers, but standard procedure bars him from interjecting, only allowing consultations during rest breaks — which could be an issue for her.

The 65-year-old has a reputation for fastidiousness and as president reportedly refused to use toilets that had been employed by others, with her staff said to insist facilities be replaced before she arrived on official visits.

Park faces multiple charges from abuse of power and coercion to bribery, and is the fourth former South Korean leader to be probed or jailed over corruption scandals.

Two former army-backed leaders who served in the 1980s to 1990s — Chun Doo-Hwan and Roh Tae-Woo — served prison terms for bribery after they stepped down.

Roh Moo-Hyun, who served from 2003 to 2008, killed himself by jumping off a cliff after being probed by prosecutors over corruption allegations in 2009.