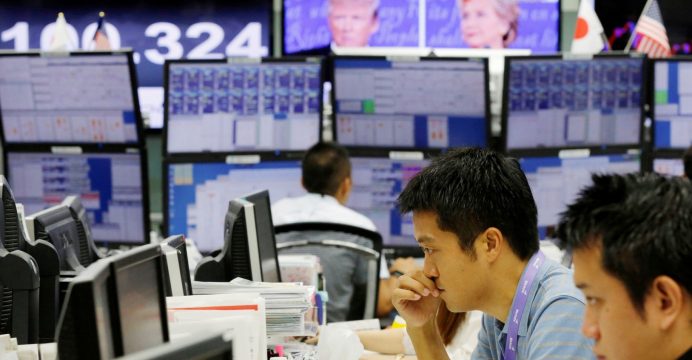 With few events to drive buying, investors took a step back following a recent rally across global trading floors while there is a nagging fear that Donald Trump’s promised tax cuts and spending splurge could come later than hoped.

“Positive catalysts to further moves higher appear to be lacking at the moment,” said Greg McKenna, chief market strategist at AxiTrader, in a note.

In early Asian trade Hong Kong and Shanghai each edged up 0.1 percent but Sydney shed 0.4 percent, Seoul gave back 0.5 percent and Singapore was also 0.4 percent lower.

In foreign exchanges the dollar was down against most other currencies after the Fed on Wednesday lifted borrowing costs as expected but pointed to another two rises this year, confounding talk of a possible three or four.

The greenback retreated against the yen and euro as well as most other high- yielding currencies including the Australian dollar, South Korean won Thai baht and Indonesia’s rupiah.

“The less hawkish stance by the Fed has opened the door for local (emerging market) trade, even more so with the stronger-than-expected Chinese data last week, adding to the global dollar squeeze,” said OANDA senior trader Stephen Innes.

Adding to market unease were concerns about Trump’s plans for global trade after his Treasury Secretary Steven Mnuchin refused to renew past anti- protectionist pledges at a G20 gathering.

Commitments of support to the existing multilateral trade system, including the World Trade Organization (WTO), were also conspicuously missing from the final communique from the finance ministers’ gathering at the weekend.

The move follows Trump’s warnings to throw up levies and revised global agreements he says are unfair to the United States.