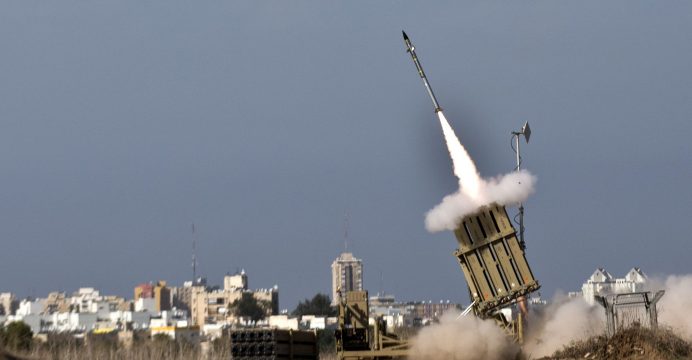 Israel intercepts missile fired at its air force in Syria

The Israeli military said it shot down one of numerous anti-aircraft missiles launched on Friday at its air force which was operating in Syria, in a rare such incident that spilled over into neighboring countries.

The Syrian army said it had shot down an Israeli jet during the operation. Israel denied this, saying that all its aircraft had returned unscathed.

“At no point was the safety of Israeli civilians or the IAF (Israeli Air Force) aircraft compromised,” an Israeli military spokesman said.

Rocket sirens had sounded in the early morning in Israeli settlements in the Jordan Valley in the occupied West Bank and two Reuters witnesses heard an explosion a few minutes later, reports Reuters.

The military said in its statement that one of the anti-aircraft missiles had been intercepted. The blast was heard as far away as Jerusalem, dozens of miles away. There were no reports of casualties or damage.

A Jordanian civil defense source said a projectile had landed in a village on the outskirts of the northern Jordanian city of Irbid, about 20 kilometers (12 miles) from the Syrian and Israeli borders, causing light damage.

The source said army engineers were examining the object, believed to be fired from Syrian territory in the direction of Israel. Video posted on social media purported to show remnants of a rocket, possibly parts of the intercepting missile, though Reuters was unable to independently verify the footage.

Israel has carried out dozens of strikes to prevent weapons smuggling to the Iranian-backed Lebanese group Hezbollah, which is fighting rebels alongside the Syrian army. However, the interception of a missile making its way over the Syrian border was an uncommon incident.

Syria’s army high command said in a statement on Friday that Israeli jets had breached Syrian air space early in the morning and attacked a military target near Palmyra, in what it described as an act of aggression that aided Islamic State.

It said its air defenses shot down one of the Israeli jets over what it called “occupied ground” and damaged another. Israel denies this.