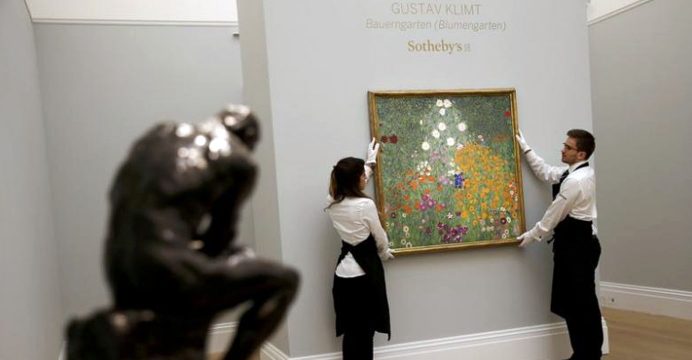 A painting of flowers by Gustav Klimt sold in London for 48 million pounds ($59 million), a record for a work by the Austrian artist and the third-highest price for any work sold at auction in Europe, Sotheby’s said on Thursday.

Described in the auction catalog as a masterpiece of Viennese fin-de-siecle art, “Bauerngarten”, completed in 1907, depicts poppies, daisies, zinnia and roses in full bloom in a garden, reports Reuters.

It was the star attraction at Sotheby’s sale of impressionist, modern and surrealist art, which took place on Wednesday evening.

The auction as a whole netted $241 million, which Sotheby’s said was the highest total for any auction staged in London, propelled particularly by Asian buyers.

“Tonight’s outstanding result is a new benchmark for London sales as much as it is a statement on the momentum of the global art market in 2017,” said Helena Newman, chairman of Sotheby’s Europe, in a statement.

The two artworks that previously sold for higher prices at European auctions were Swiss sculptor Alberto Giacometti’s “Walking Man I”, which sold for 65 million pounds in 2010, and Flemish master Peter Paul Rubens’ “The Massacre of the Innocents”, which went for 49.5 million pounds in 2002.