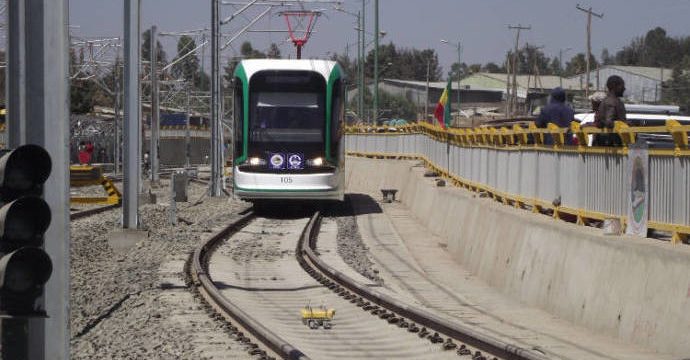 But despite government promises, the roads below are still clogged with traffic 14 months after the light rail system’s opening, and for many residents the city’s network of overcrowded minibus taxis remain the only option.

“It’s better than nothing,” said retiree Zerayakob Assefa, dismissing the half a billion dollar investment with a shrug as he waited for a train to the city’s eastern suburbs. When one did arrive, 15 minutes later, it was so packed he could not board.

“I will never get on it again!” said one exasperated passenger as she squeezed from the jammed car.

Opened in September 2015, the light rail was supposed to ease traffic in the capital of Africa’s second most populous country. It is the first system of its kind in sub-Saharan Africa, and has caught the attention of other cities such as Lagos and Nairobi which are planning their own traffic-reducing tramways, reports BSS.

Ethiopian officials have touted the two-line, 34-kilometre system as a sign of the dividends the country’s rapid economic growth is paying to its people.

One of the continent’s best-performing economies, Ethiopia grew by nearly 10 percent in 2015, according to the World Bank.

But growth is expected to slow due to a drought and a recent series of anti-government demonstrations that have targeted foreign businesses.

That has not stopped Prime Minister Hailemariam Desalegn’s administration from ploughing money into Chinese-built infrastructure projects including dams, airport terminals and highways.

The light railway was built by the China Railway Engineering Corporation (CREC) at a cost of $475 million (447 million euros), 85 percent of which was covered by China’s Export-Import Bank.

Excited commuters queued for hours to be the first to ride the tramway when it opened but now say it is not the transportation game-changer they had hoped for.

With ticket prices from $0.10 to $0.30, the train is comparable to the cost of a bus ride but the light rail is overcrowded and the network reaches only certain neighbourhoods, commuters said.

Many in the city of four million are left with no choice but to rely on the “blue donkeys”, as Addis Ababa’s cramped minibuses are known.

“They are full inside,” electronics salesman Andulam Alemu said of the light rail as he waited in a queue to board a minibus in the Kazanchis neighbourhood. “Still there is the problem of transport.”

Some even blamed the light railway for increasing traffic. While the tracks are elevated in parts of town, in others they cut between and through lanes of traffic, leaving thoroughfares snarled with cars, complained minibus driver Amin Ansar.

“Even in the places where the rails are located, it’s made traffic worse, because you can’t cross to the other side,” Ansar said.

Awoke Mulu, a spokesman for the Addis Ababa Light Rail Transit Service, said the trains have already carried 50 million passengers and made a “positive impact” on their commute but that the city’s large and rapidly growing population makes the job difficult.

“We cannot say we are eliminating the transport problem, because the number of people in the city is increasing,” Mulu said.

Wear and tear is also taking its toll with around a third of the 41 light rail cars out of action and undergoing repairs, exacerbating delays and overcrowding.

Elias Kassa, a professor of railway science at the Norwegian University of Science and Technology, said planners had failed to integrate the new light rail with the pre-existing bus system.

Whether rail or bus, commuters have to walk long distances and scramble across busy roads to catch public transport, a flaw Kassa warned could ultimately undermine the network if not corrected. Still, he called the system a good start for a growing city trying to keep up with its transport needs.

“The goal was to alleviate shortage of transport system, mainly for people of lower income,” Kassa said. “If you think of that, I’d say it has obtained the goal, not fully, but to some extent.”