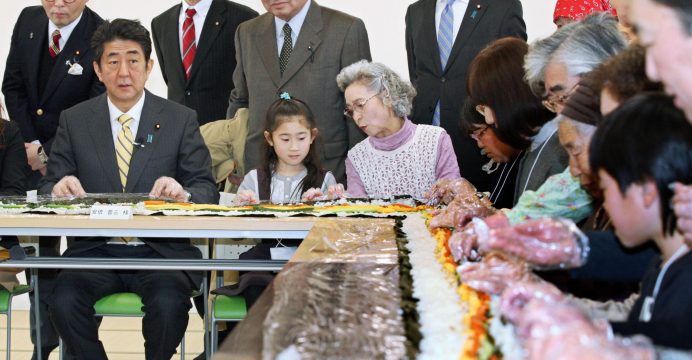 Japanese Prime Minister Shinzo Abe’s support rate slipped six points to just under 56 percent, an opinion poll showed on Sunday, after weeks of questions in parliament about a murky land deal by a school operator to whom his wife had links.

Abe has said neither he nor his wife, Akie, was involved in the sweetheart deal for state-owned land purchased by Moritomo Gakuen, an educational body in the western city of Osaka that also runs a kindergarten promoting patriotism, reports Reuters.

But opposition parties are pressing for parliament to call the school principal, who resigned his post on Friday, and others to answer questions about the deal, a demand Abe’s Liberal Democratic Party (LDP) is resisting.

Support for Abe’s cabinet dropped to 55.7 percent, down six points from the previous month, Kyodo said.

Nearly 75 percent of those responding said the former principal, Yasunori Kagoike, should be summoned to parliament to get to the bottom of the deal, which 86.5 percent said was done at an inappropriately low price.

The drop in support for Abe in Sunday’s survey was much less than that in an online survey by the Nikkei business daily last week, which found that Abe’s support fell to 36.1 percent from 63.7 percent in the previous week.

Akie, who has adopted a higher profile public role than most traditional Japanese first ladies, last month cut her ties with the elementary school that Moritomo Gakuen had planned to open in April.