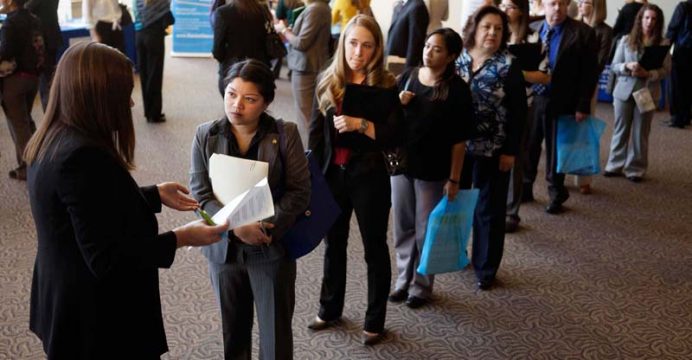 The US economy had strong month of job creation in February﻿

The US economy had another strong month of job creation in February, the Labor Department reported on Friday — a result sure to boost already high expectations that the Fed will raise interest rates next week.

President Donald Trump’s White House also seized on the news as a validation of its economic agenda, though much of this has yet to take shape, reports BSS.

That was well above analyst forecasts and just shy of the 238,000 new positions added in January and in another sign that jobs markets are tightening, the already low unemployment rate fell a tenth of a point to 4.7 percent, leaving the unemployed population at 7.5 million.

That decline came even as the labor force participation rate rose to 63 percent, a level not surpassed in almost three years, meaning people who had been on the sidelines, perhaps discouraged from looking for a job, are rejoining the labor market.

With February’s robust job creation and an upward revision to January’s numbers, the world’s largest economy has added an average of 209,000 new jobs over the last three months.

Wall Street closed modestly higher after the news, following a downward trend for much of the week. The blue-chip Dow Jones Industrial Average rose 0.2 percent to 20,902.98.

The Federal Reserve has sent strong signals this month that it is likely to hike rates, absent a negative surprise in economic data. Job creation, unemployment and inflation have all approached the central bank’s targets in recent months.

Shepherdson and other economists also pointed to the unseasonably warm temperatures as a factor boosting jobs growth, including in the construction sector, which added 98,000 jobs over the last two months.

“We’re pretty sure that both January and February payrolls enjoyed a weather boost,” Shepherdson wrote in a client note.

Shepherdson said current trends suggested the unemployment rate could hit 4.5 percent before June, when he expects the Fed to again raise rates.

In the goods-producing sector, payrolls rose by 95,000, the highest level since March of 2000. Manufacturing, which has trended steadily upwards since early 2010, added 28,000 new positions for the month. Employment in the retail sector fell by 26,000 jobs.

Among major demographic groups, the unemployment rate fell for most but rose by 0.4 points among African Americans to 8.1 percent. The share of long-term unemployed, or those without work for more than 26 weeks, was little changed at 1.8 million.

Gary Cohn, director of the White House’s National Economic Council, touted the latest employment report as “a perfect number” and a sign of job creation spurred by the Trump administration.

“I think this number reaffirms everything that we’re trying to do,” Cohn told CNBC, asserting that employment would be boosted further by the recent pledges of domestic investment that Trump has extracted from major companies.

“It may be tempting for today’s policymakers to claim credit for this solid employment growth but credit is only truly deserved when the economy grows faster than expected,” she wrote in a statement.

Michael Gapen and Rob Martin of Barclays also said the gains in the manufacturing sector were likely due to a stabilization in the sector after a subdued 2016.

“We see no reason to be overly optimistic in the detail,” the wrote in a client note.

White House spokesman Sean Spicer touted the jobs numbers, noting in a tweet just 22 minutes after the report’s release that they were “great news for American workers.”

But according to Jason Furman, who chaired the White House Council of Economic Advisors under former President Barack Obama, the tweet violated a long-standing rule prohibiting government officials from commenting on official economic data within an hour of their release.

“Not the biggest issue, but failure to follow a simple black-and-white rule does not speak well of respect for rule of law more generally,” Furman wrote on Twitter.

Cohn’s comments came a full hour after the release. Spicer later said he didn’t think his tweet had caused any market disruption,telling reporters: “I apologize for being so excited to see so many Americans back to work.”