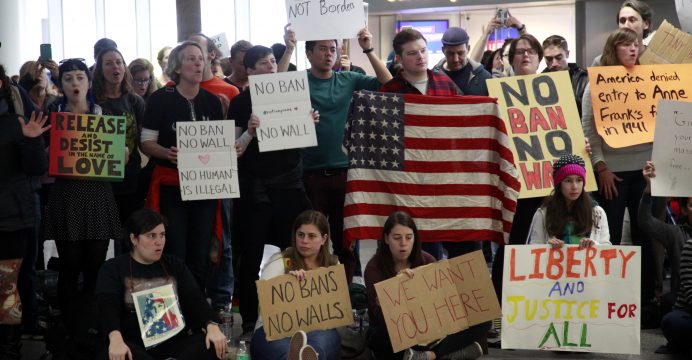 Arguing that the new travel ban violates the U.S. Constitution, the state asked a Hawaii federal court to grant a temporary restraining order that should apply nationally , reports Reuters.

U.S. District Court Judge Derrick Watson ruled earlier in the day that the state could sue over Trump’s new order, which was signed by the president on Monday.

It is the first legal challenge to the revised order.

Watson said the state could revise its initial lawsuit, which had challenged Trump’s original ban signed in January.

A hearing is set for March 15, a day before the new ban is to go into effect.

The government has said the president has wide authority to implement immigration policy and that the travel rules are necessary to protect against terrorist attacks.

Some legal experts have said court challenges will be more difficult now because changes to the order give exemptions to more people.

The revised travel order changed and replaced the original, more sweeping ban issued on Jan. 27 that caused chaos and protests at airports and was challenged in more than two dozen lawsuits around the country. A federal judge in Seattle put the first order on hold, in a decision upheld by an appeals court in San Francisco.

The new order is much more narrowly tailored. It keeps a 90-day ban on travel to the United States by citizens of Iran, Libya, Syria, Somalia, Sudan and Yemen, but excludes Iraq and applies the restriction only to new visa applicants. It also removed an indefinite ban on all refugees from Syria.

The order no longer covers legal residents or existing visa holders, and makes waivers possible for some business, diplomatic and other travelers.

Immigration advocates have said the new ban, like the original one, discriminates against Muslims.

But the first hurdle in a lawsuit is proving “standing” to sue, which means finding someone who has been harmed by the policy. With so many exemptions, legal experts have said it might be hard to find individuals that a court would rule have a right to sue.