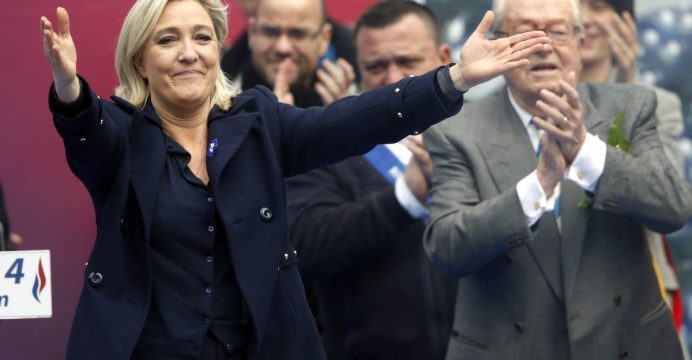 France’s ambassador to Japan has pledged not to serve under far-right leader Marine Le Pen if she becomes president, saying her policies are at odds with French principles.

Thierry Dana, writing in Le Monde newspaper, became the first high-ranking French diplomat to state publicly that he would step down rather than work for Le Pen if she were to win presidential elections held over two rounds in April and May, reports Reuters.

“If the pieces of the French tragedy which are being put in place were to lead to her election, I would stand aside from any diplomatic role,” Dana said.

“I couldn’t loyally defend your positions, which run counter to all the principles championed by France when it is great in the world,” he wrote.

Buoyed by the election of President Donald Trump in the United States and by Britons’ vote to leave the European Union, Le Pen’s anti-immigration, anti-EU National Front hopes for similar populist momentum in the French election.

Most polls show Le Pen winning the first round but losing heavily in the second, whether she is pitted against independent centrist Emmanuel Macron or conservative Francois Fillon.

However, Fillon’s legal woes over allegations of misuse of public money have increased investors’ concerns that Le Pen could win and take France out of the euro and the EU.

Dana, 60, said he was due to take up a new diplomatic post in the summer, but he would rather give it up than “serve the diplomacy of the National Front”.

“When you claim to restore our grandeur, you are shutting France in a cellar filled with demons that we thought had been forgotten,” he said.

The diplomat raised concerns over a speech by Le Pen last month when she warned civil servants who took part in “persecutions” of government opponents that they would be held responsible for their actions once the current government had been swept from power.