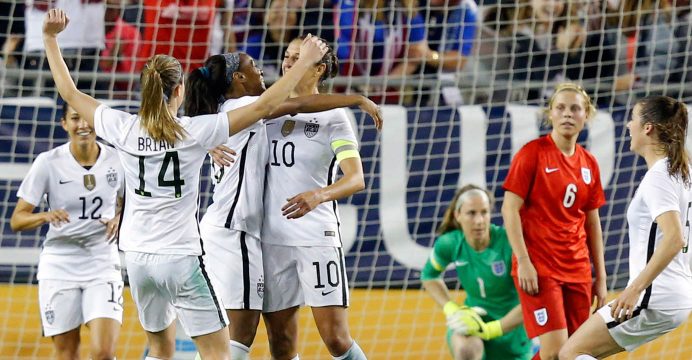 France rout US women to lift She Believes Cup

Needing only a draw to win the round-robin competition, France got off to a dream start when Abily stroked her first goal home from the penalty spot at RFK Stadium after only eight minutes.

The French women then doubled their lead barely a minute later when a speculative long ball forward caused all sorts of panic in the US defensive ranks.

Eugenie Le Sommer latched onto the pass and tied US defender Allie Long in knots before picking her spot to tuck away a low finish.

That double salvo rocked the US women, who struggled to gain a foothold in the contest against a skilful French outfit, who had already drawn with Germany and beaten England earlier in the tournament.

Abily applied the coup de grace on 63 minutes for France, sidefooting home Eve Perisset’s low cross from the right flank to make it 3-0.

The victory capped a fine tournament France as they build toward’s this year’s Women’s Euro in the Netherlands, where they will be among the favourites.

Mittag bundled home the winner in the 44th minute as Germany secured their first win following a draw with France and defeat against the United States in their opening games last week.

Germany held on for the victory despite a furious late onslaught from England, who came closest to equalising in injury time when Toni Duggan went clear on goal only to be denied from close range.