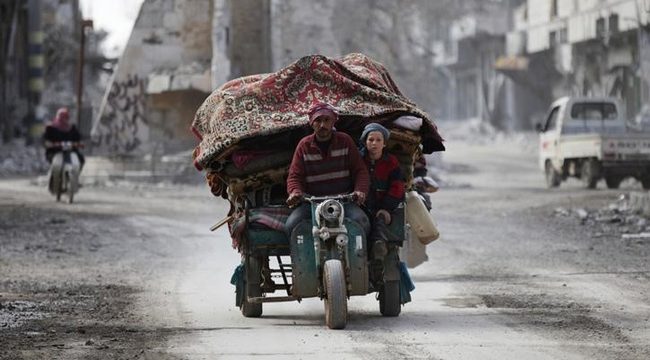 Large parts of Damascus have survived almost six years of conflict in Syria relatively unscarred, but shortages of fuel and electricity, spiraling prices and a lack of jobs mean the lives of its residents are far from unscathed.

A series of recent military victories has made the government more secure but done little to alleviate many hardships, evident in the queues of cars snaking out of petrol stations alongside columns of pedestrians with jerry cans.

Meat, once a staple for many, has become a luxury for all but a few and prices are soaring on a thriving black market.

“We are barely managing,” said Sufian, a 47-year-old oil engineer speaking at a jobs fair where he was looking for better employment along with hundreds of younger Syrians whose economic prospects have been short-circuited by the war, reports Reuters.

“This year I had to borrow money to keep providing for my family,” he told Reuters, withholding his full identity.

Such struggles show how hard it will be for President Bashar al-Assad to reassert normality across Syria, even if his opponents’ hopes of ousting him appear to have been dashed for now by Iranian and Russian-backed government advances.

Conditions in Damascus – though difficult – are better than in many other parts of Syria, with large districts mostly intact, suffering only occasional bombardment, and with running water restored after it was cut off for weeks earlier this year.

Elsewhere in government-controlled areas, damage has been more extensive, there has been no running water for long periods and fighting makes access to the outside world precarious.

It is also in far better shape than many rebel-held areas, devastated by intense aerial bombardment and critically short of food, water and medical supplies.

Half of Syria’s population has been displaced by a conflict whose sixth anniversary falls on March 15. Many have sought shelter in government areas: with friends or relatives, crammed into public buildings like schools or simply living rough.

When Sufian fled his war-ravaged hometown of Sheikh Yassine with his wife and three children four and a half years ago for the comparative safety of his sister’s house in Damascus, he left behind a prosperous life and ownership of two houses.

Although both Sufian and his wife retained their government jobs when they fled the war and moved to the capital, inflation has eroded their salaries and they can barely provide enough food for their children, who are adults but unemployed.

The Syrian pound has lost 90 percent of its value since the war began, sending the price of essential imported goods soaring and causing shortages of petrol and fuel for cooking and heating.

“My salary is now less than $100 a month, which is enough for only four days,” Sufian said, his green eyes and facial expressions revealing more distress than he could describe.

The Damascus fuel queues are evidence of shortages that have become particularly acute during one of Syria’s harshest winters for years and that can be alleviated only for those willing to pay the 100 percent mark up on the black market.

“This is a country of miracles,” was the bitterly ironic verdict of Bahjat Yassine, 65, a retired soldier living in the suburb of Jaramana.

“There is no heating and no fuel oil at the state-run distribution centers. But they are abundant in the free market. How come?” he said, while waiting at a local workshop for the repair of a tiny gas heater that he could afford to replace.