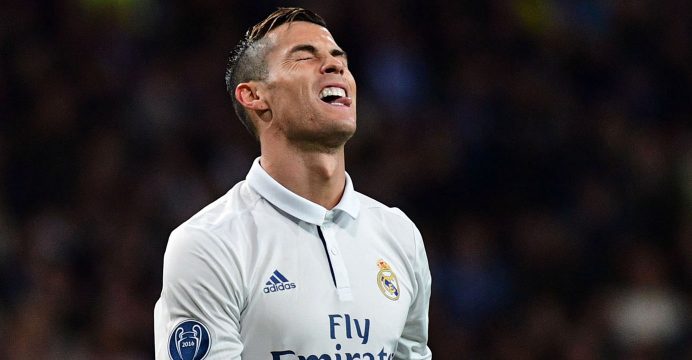 Star striker Cristiano Ronaldo trained alone Friday after feeling pains and could be a doubt for Real Madrid’s game against Eibar.

“He felt something, but nothing serious. He didn’t train with us this morning,” coach Zinedine Zidane told a press conference ahead of Saturday’s La Liga game.

While the squad was put through its paces, Ronaldo did sprints on his own.

Zidane could be tempted to rest Ronaldo ahead of Real’s Champions League last 16 return game at Napoli next Tuesday.

“As you know, all matches are important but the most important is that the player is OK. We will see how Cristiano feels,” Zidane said of Ronaldo’s prospects for the weekend.

A 3-3 draw at home to Las Palmas on Wednesday saw Real Madrid lose top place in the Spanish championship for the first time since October.

Ronaldo once again proved decisive in salvaging a point with two late goals against Las Palmas pulling Madrid back from the brink of a defeat.

They are one point behind Barcelona, but have a game in hand.