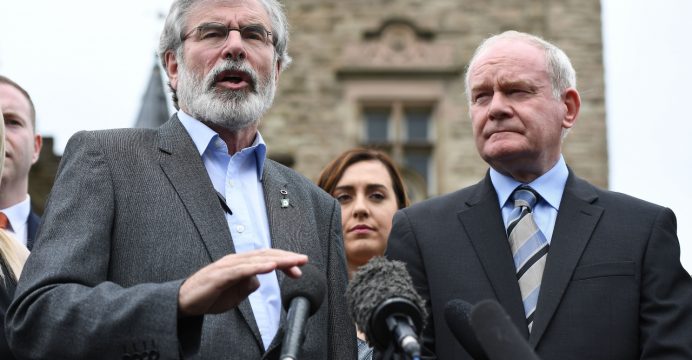 Northern Irish leaders prepared on Saturday for three weeks of challenging talks to save their devolved government after a snap election that could have dramatic implications for the politics and constitutional status of the British province.

The pro-British Democratic Unionist Party narrowly remained the largest party following the closest-ever election for the provincial assembly. But surging Irish nationalists Sinn Fein came within one seat of their rivals to deny unionist politicians a majority for the first time since Ireland was partitioned in 1921.

Major policy differences between the sides risk paralyzing government and dividing communities just as Britain prepares to leave the European Union. Northern Ireland, the poorest region of the United Kingdom, which has its only land border with the EU, is considered the most economically exposed to Brexit.

“Everything has changed and we enter into a new political landscape from Monday,” outgoing finance minister Mairtin O’Muilleoir of Sinn Fein told national Irish broadcaster RTE.

The two largest parties have three weeks to form a new power-sharing government to avoid devolved power returning to London for the first time since 2007.

With relations at their lowest point in a decade and Sinn Fein insisting among its conditions that DUP leader Arlene Foster step aside before it will re-enter government, few analysts think an agreement can be reached in that time.

An acrimonious campaign also added to the friction. Foster’s outright rejection of some Sinn Fein’s demands by saying that “if you feed a crocodile, it will keep coming back looking for more” antagonized and rallied nationalists.

Michelle O’Neill, the 40-year-old new leader of Sinn Fein whose elevation represented a generational shift within the former political wing of the Irish Republican Army, benefited most from the highest turnout in two decades.

“Foster angered nationalists and made sure they went out to vote but Michelle O’Neill is also a much more acceptable nationalist face than previously,” said Gary Thompson, a 57-year-old voter, as he went for a jog near parliament buildings.

Pensioner Tom Smyth, a DUP supporter, said Foster had to stand up to Sinn Fein but in doing so probably helped mobilize their rivals’ vote.