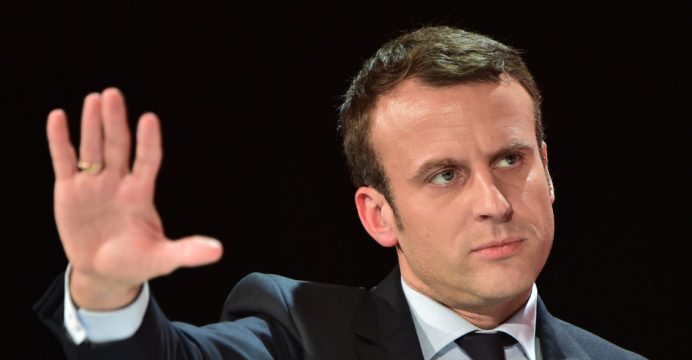 Former investment banker Emmanuel Macron cemented his status as favorite to win the French presidency on Friday as his conservative rival, Francois Fillon, came under renewed pressure to pull out because of a deepening financial scandal.

For the first time since the line up of candidates became clear, a poll showed Macron finishing ahead of far-right leader Marine Le Pen in the opening round. It came a day after he promised a blend of fiscal discipline and stimulus to strengthen a feeble economic recovery, reports Reuters.

As the independent centrist’s campaign built momentum, Fillon’s camp was mired in a crisis of confidence, buffeted by a string of resignations among his close advisers and backers.

The same poll showed that if the 62-year-old stepped down and was replaced by another former prime minister, Alain Juppe, it would be Juppe who wins in the first round, with Le Pen eliminated.

A source in Juppe’s entourage said the 71-year-old – who lost to Fillon in the November primaries – was “ready to take part in the search for a solution”.

Juppe, himself convicted in 2004 for misuse of public funds, has until now ruled out a comeback. “No is no,” he tweeted last month.

The spread between French and German 10-year government bond yields fell to its lowest in a month on Friday after the Odoxa poll showed Macron pulling ahead of Le Pen, suggesting investors were now less worried about a far-right victory.

“We saw a peak of panic in February when the focus was on Le Pen,” said DZ Bank strategist Christian Lenk. “It’s always been clear that the odds of Le Pen becoming the next president were quite low and now we see confirmation of that in the polls.”

Macron, 39, who has never run for elected office and finds himself propelled to the front of the race in part by the scandal engulfing Fillon, on Thursday unveiled a detailed manifesto that included plans to revamp the pension system.

Fillon this week promised to fight “to the end” despite the deepening financial scandal over his wife’s pay that could see him placed under formal investigation for misuse of public funds later this month.

He has complained of judicial and media bias that amounted to a “political assassination”. Several former supporters have since deserted him, saying they cannot support him given those attacks on the judiciary.

On Friday his chief spokesman, Thierry Solere, joined their ranks along with another senior Republican, Dominique Bussereau. Solere did not say why he was quitting.

In a further blow, a source close to the UDI said the centre-right party was set to withdraw its support too.

Some lawmakers said Larcher was among conservative politicians who earlier this week urged Fillon to step down in Juppe’s favor, but Sarkozy loyalists balked at the idea.

The Odoxa poll put Macron on 27 percent in the first round on April 23 with Le Pen behind him on 25.5 percent and Fillon on 19. Le Pen has consistently led first round polls this year.

In a scenario where Juppe was to stand in Fillon’s place, Odoxa put Juppe in front on 26.5, with Macron on 25 and Le Pen out of the contest on 24 percent.