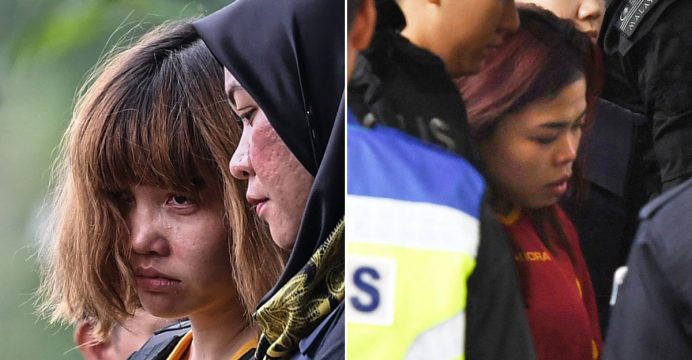 Malaysia on Wednesday charged two women, an Indonesian and a Vietnamese, with murdering the estranged half brother of North Korea’s leader in a bizarre airport assassination using a super-toxic nerve agent that killed in minutes.

Siti Aishah, a 25-year-old mother of one from Jakarta, and Doan Thi Huong, 28, from rural northern Vietnam, could be hanged if they are convicted of the killing of Kim Jong Nam at Kuala Lumpur International Airport on Feb. 13.

Police brought the two women to court handcuffed. As they left, they were made to wear bullet-proof vests, reflecting Malaysian authorities’ fears that others involved in the killing could want the women silenced, reports Reuters.

No plea was recorded after the charges were read out.

But Aishah and Huong have told diplomats who visited them in custody that they were unwitting pawns in an assassination that U.S. officials and South Korean intelligence have said was organized by North Korean agents.

Huong’s lawyer told reporters outside the court that his client had told him she was innocent.

“Of course, she’s definitely distressed because she is facing death penalty,” he added.

The next court date will be April 13, when prosecutors will apply for the accused to be tried jointly.

Kim Jong Nam, who had criticized the regime of his family and his half-brother Kim Jong Un, died after the two women allegedly smeared VX nerve agent, a chemical described by the United Nations as a weapon of mass destruction, across his face.

He had been preparing to catch a flight to Macau, the Chinese territory where he had been living under Beijing’s protection since going into exile several years ago.