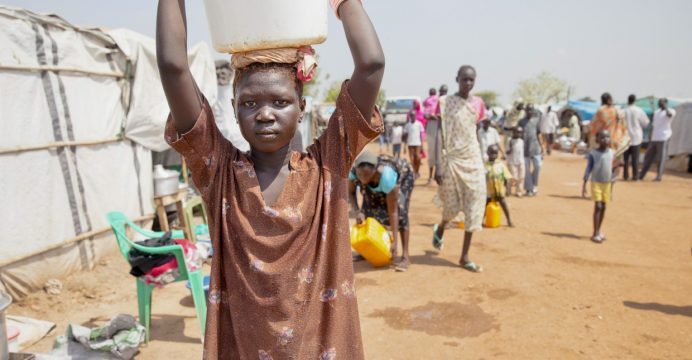 Tens of thousands flood into Sudan from famine-hit South Sudan

More than 31,000 South Sudanese refugees – mostly women and children – have crossed the border into Sudan this year, fleeing famine and conflict, the United Nations refugee agency said on Monday.

The United Nations declared famine last week in parts of South Sudan’s Unity State, with about 5.5 million people expected to have no reliable source of food by July.

“Initial expectations were that 60,000 refugees may arrive through 2017, but in the first two months alone, over 31,000 refugees arrived,” a statement from the office of the United Nations High Commissioner for Refugees (UNHCR) in Khartoum said.

More than a million people have fled South Sudan since a civil war erupted in 2013 after President Salva Kiir’ fired Vice President Riek Machar. Fighting between government forces and Machar-led rebels has caused the largest mass exodus of any conflict in central Africa since the 1994 Rwandan genocide.

Some 328,339 South Sudanese refugees have sought refuge in Sudan, including about 131,000 in 2016, many exhausted, malnourished and ill, having walked for days. More than 80 percent of the latest arrivals were women and children.

The fighting has uprooted more than 3 million people and the U.N. says continuing displacement presented “heightened risks of prolonged (food) underproduction into 2018”. In the fighting, food warehouses have been looted and aid workers killed.