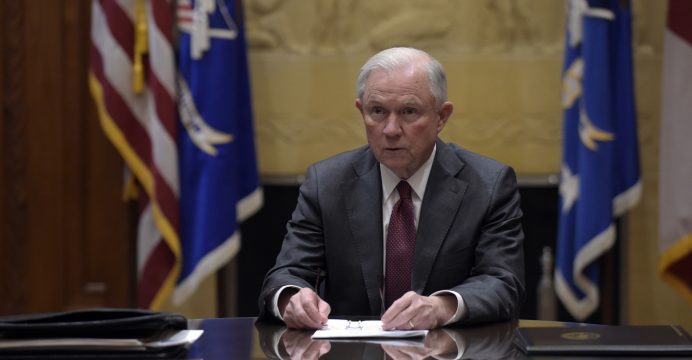 White House does not rule out Sessions recusal on Russia probes

The White House on Sunday did not rule out that Attorney General Jeff Sessions may recuse himself from Justice Department investigations into Russian meddling in the 2016 presidential election.

Sarah Huckabee Sanders, a deputy White House press secretary, said congressional investigations of Russian meddling in the 2016 presidential election would have to run their course before Sessions, who was a top campaign adviser to Trump, needed to decide whether to step aside from the FBI investigations.

“I wasn’t saying that he shouldn’t recuse himself or that he should,” Sanders told ABC’s “This Week.” “My point is I don’t think we’re there yet. Let’s work through this process.”

Democrats have been pushing for an independent investigation of links between the Trump campaign team and Russian officials, reports Reuters.

The Federal Bureau of Investigation and U.S. intelligence agencies are looking into Russian espionage operations in the United States. They are also looking at contacts in Russia between Russian intelligence officers or others with ties to President Vladimir Putin’s government and people connected to Trump or his campaign.

Republican Representative Darrel Issa said in an interview late Friday he believed Sessions and his deputy, also a political appointee, needed to separate themselves from the FBI probes related to Trump.

Trump’s national security adviser, Michael Flynn, resigned three weeks into the new administration after revelations surfaced that he had discussed U.S. sanctions on Russia with the Russian ambassador to the United States before Trump took office and misled Vice President Mike Pence about the conversations.

“The attorney general must recuse himself,” House of Representatives Democratic leader Nancy Pelosi said on ABC.

She cited news reports that White House officials had asked the FBI to dispute a New York Times story on Feb. 14 indicating regular contacts between senior Russian intelligence agents and members of Trump’s team during the 2016 presidential campaign.

On Saturday, The Washington Post reported the Trump administration tried to enlist intelligence officials and lawmakers to rebut the stories on Russian contacts.