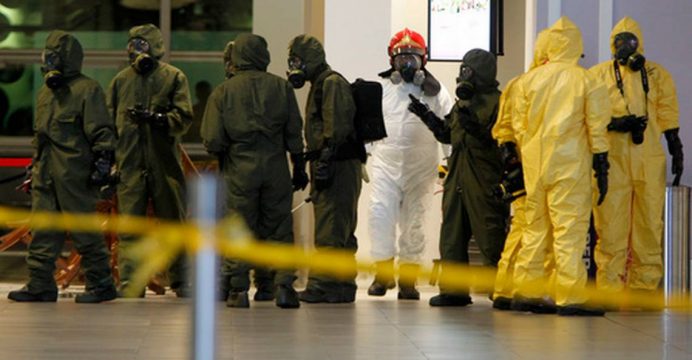 The airport terminal where the half-brother of North Korea’s leader was killed with a nerve agent has been declared free of any “hazardous material” by Malaysian police.

An Indonesian woman arrested for the murder has said she was given 400 Malaysian ringgit ($90; £72) to carry out a prank.

Siti Aisyah, 25, told Indonesian embassy officials that she was given the cash to smear Kim Jong-nam’s face with “baby oil” as part of a reality show joke.

VX is classified as a weapon of mass destruction by the United Nations. A drop on the skin can kill in minutes.

Health Minister S Subramaniam said the discovery that the VX toxin was used confirmed the hospital’s autopsy result, which suggested that a “chemical agent caused very serious paralysis”, leading to death “in a very short period of time”.

The airport has been swept for toxic chemicals by various specialised police teams, forensic experts, the fire department’s hazardous materials unit and the Atomic Energy Licensing Board.

“As a result of this screening process done we confirm: number one, there is no hazardous material found in KLIA2. Number two, KLIA2 is free from any form of contamination of hazardous material. And thirdly, is KLIA2 is declared a safe zone,” said Abdul Samah Mat, the police official heading the investigation.