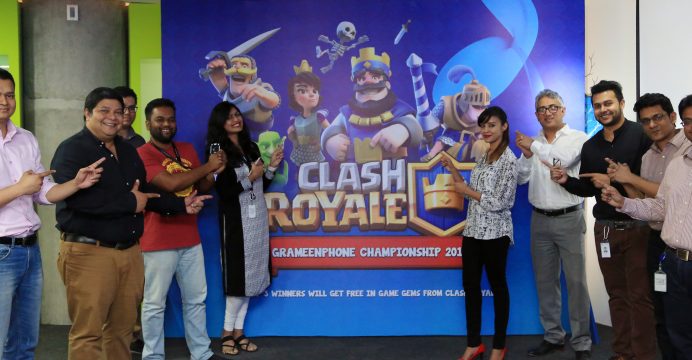 Grameenphone commences the first ever ‘Clash Royale Grameenphone Championship’ in Bangladesh on February 23rd. The month-long tournament will continue till 2nd April 2017.

Top three winners of the tournament will receive in-game gems from Clash Royale. The champion will get 2500 gems, while the runner up and second runner up will get 2000 and 1500 gems respectively. It is the first ever tournament on the globally popular game in Bangladesh.

Clash Royale is a multiplayer game from Supercell, makers of Clash of Clans – a game that became a global phenomenon. Clash Royale was released globally in 2016, and became the winner of Google Play Store’s ‘Best Game of the Year’.

‘The market for gaming in Bangladesh is extremely fertile, which is signified by the exponential rise in the number of gamers over the years. This tournament is expected to be a treat for the gamer community of the country,’ said Yasir Azman, CMO, at Grameenphone. “We hope to see more international quality local games to be developed in near future,” he added.

“We hope to see more international quality local games to be developed in near future,” he added.

Nehal Ahmed, Senior Director, Communications of Grameenphone said, ‘It has been scientifically proven that a healthy habit of gaming improves the analytical and decision-making skills of people, along with providing them much needed entertainment in the otherwise hectic urban life. Grameenphone, as the leading digital services provider in Bangladesh, is trying to enable more people to develop a healthy habit of gaming besides working.’

Gamers interested in participating in the tournament should register at http://gpcampaign.com/CRChamp2017/. All participants will enjoy special data offer for Clash Royale (conditions apply) during the month-long tournament.