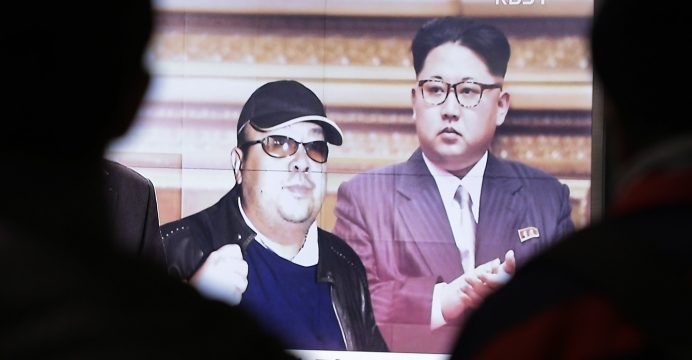 VX nerve agent, a chemical the United Nations classifies as a weapon of mass destruction, was used to kill the estranged half-brother of North Korean leader Kim Jong Un in a bizarre murder in Malaysia last week, police said on Friday.

Kim Jong Nam was killed on Feb. 13, shortly after being assaulted at the airport in the Malaysian capital, Kuala Lumpur, by two women who wiped the chemical on his face as he prepared to board a flight to the Chinese territory of Macau, reports Reuters.

South Korean and U.S. officials have said they believe North Korean agents assassinated Kim Jong Nam. He had been living with his family in Macau under Beijing’s protection and had spoken out against the North Korean regime.

Malaysian police were investigating whether the VX – which is believed to be the most toxic known nerve agent and is banned globally except for research – was brought into the country or made there.

“If the amount of the chemical brought in was small, it would be difficult for us to detect,” police chief Khalid Abu Bakar told reporters.

The two women suspects – one Vietnamese and the other Indonesian – are in police detention along with a North Korean man. Seven other North Koreans are wanted in connection with the case, including a diplomat at the embassy in Kuala Lumpur.

Malaysia has repeatedly urged the victim’s family to come forward to help with the inquiry, while North Korea has demanded the body be handed over to its embassy directly, sparking tension between the two usually friendly countries.

Malaysia’s chemical weapons analysis unit found traces of VX, or S-2 Diisopropylaminoethyl methylphosphonothioate, on swabs taken from the eye and face of the victim, according to police.

“Other exhibits are under analysis,” Khalid said in a statement, citing a preliminary report.

Police have said the two women were paid to carry out the assault and had been told to wash their hands before fleeing from the airport. They had rehearsed the attack in shopping malls before carrying it out on Kim.

One of the women had suffered from the effects of the chemical and had been vomiting, Khalid said.