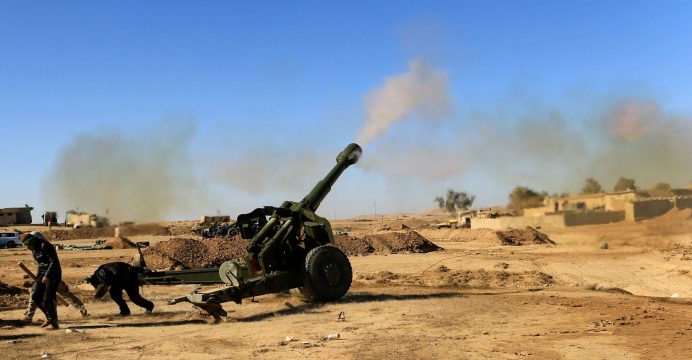 U.S.-backed Iraqi forces pushed into western Mosul on Friday after retaking the city’s airport from Islamic State, as aid agencies warned the most dangerous phase of the offensive was about to begin for hundreds of thousands of civilians.

Troops disarmed booby traps planted by retreating militant fighters in the airport, which the army plans to use as a base from which to drive Islamic State from Mosul’s western districts and deal a decisive blow to the group, reports Reuters.

As they did, Iraqi fighter jets dropped bombs on Islamic State positions inside Syria on Friday. It was the first time the Iraqi government publicly acknowledged striking militant targets inside Syria.

The new offensive comes after government forces and their allies finished clearing Islamic State from eastern Mosul last month, confining the insurgents to the western sector of the city, which is bisected by the Tigris river.

Commanders expect the battle in western Mosul to be more difficult, in part because tanks and armored vehicles cannot pass through the narrow alleyways that crisscross ancient districts there.

The International Rescue Committee said the most dangerous phase of the battle was about to begin for the 750,000 civilians believed to be trapped inside Mosul.

“There is a real danger that the battle will be raging around them for weeks and possibly months to come,” said acting country director Jason Kajer.

The United Nations has warned up to 400,000 civilians could be displaced by the new offensive amid food and fuel shortages.

Separately, federal police and an elite Interior Ministry unit known as Rapid Response advanced into the Hawi al-Josaq and al-Danadan districts after breaching a berm and a trench set up by Islamic State north of the airport, a spokesman said.

Early raids in the city’s west have so far been restricted to thinly-populated areas. The government encouraged civilians to stay in their homes, but some were caught in the crossfire.

Jamal Abdelnasser, 14, was shot in the leg by Islamic State when the militants stormed his home to take up sniper positions. After crossing the frontline, soldiers unwrapped the blood-soaked bandages around his leg and poured iodine on the bullet wound.

In another incident, a Reuters correspondent saw a dozen civilians fleeing toward Iraqi security forces from the outskirts of Mamoun.

Defeat in Mosul would likely deal a hammer blow to Islamic State’s self-styled caliphate in areas it seized in 2014. But the group still controls swathes of territory in neighboring Syria and patches in northern and western Iraq from where it could fight a guerrilla-style insurgency in Iraq, and plot attacks on the West.