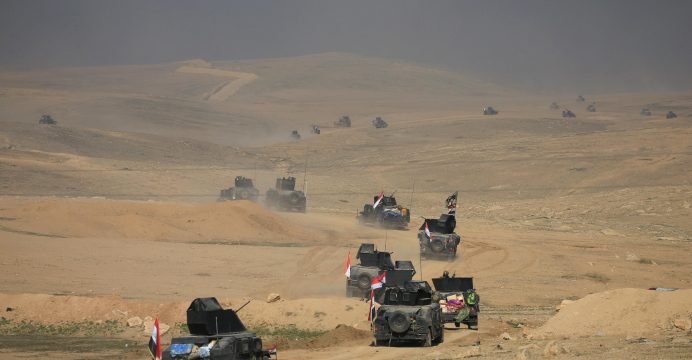 U.S.-backed Iraqi security forces captured Mosul airport on Thursday, state television said, in a major gain in operations to drive Islamic State from the western half of the city.

Losing Mosul could spell the end of the Iraqi side of militants’ self-styled caliphate in Iraq and Syria, which Islamic State leader Abu Bakr al-Baghdadi declared from the city after sweeping through vast areas of Iraq in 2014, reports Reuters.

Iraqi forces hope to use the airport as a launchpad for their campaign to drive the militants from Iraq’s second largest city.

A Reuters correspondent saw more than 100 civilians fleeing towards Iraqi security forces from the district of al-Mamoun. Some of them were wounded.

“Daesh fled when counter terrorism Humvees reached al-Mamoun. We were afraid and we decided to escape towards the Humvees,” said Ahmed Atiya, one of the escaped civilians said, referring to Islamic State by its Arabic name.

“We were afraid from the shelling,” he added.

Federal police and an elite interior ministry unit known as Rapid Response had battled their way into the airport as Islamic State fighters fought back using suicide car bombs, a Reuters correspondent in the area south of Mosul airport said.