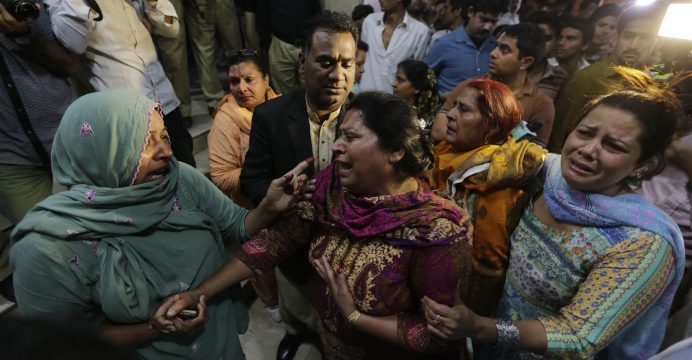 A bomb exploded in an upscale market in Pakistan’s eastern city of Lahore on Thursday, killing at least five people and wounding 21, officials said.

Security forces, suspecting the bomber was still alive, cordoned off the market in a residential neighborhood, home to banks and coffee shops, and people were not being allowed to leave or enter, they said.

Initial reports on television channel Geo News said a generator had exploded but sources in the Punjab police and provincial government told Reuters the explosion was caused by car, reports Reuters.

Pakistan has been struck by a wave of terrorist attacks in recent weeks, killing at least 130 people across the country and leaving hundreds wounded. The worst of the attacks was at a Sufi shrine in southern Sindh province that killed 90 people this month.

“There are casualties and injuries but we cannot confirm figures as the rescue operation is under way,” Punjab police spokesman Nayab Haider said.

A witness who works at a bank in the market told Reuters that his workplace was shaken by a “frightening” explosion.

“We left the building and saw that the motor-bikes parked outside were on fire and all the windows in the surrounding buildings were shattered,” the witness, Mohammad Khurram, said.