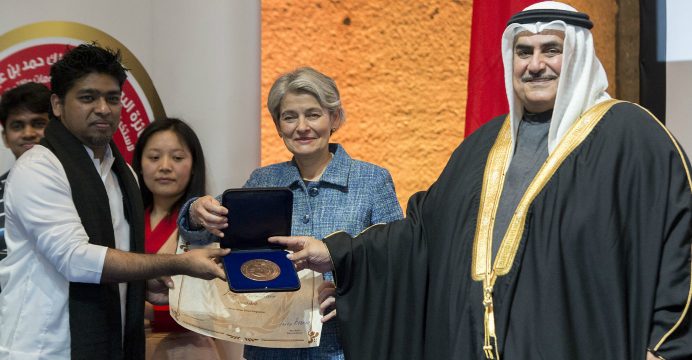 Korvi Rakshand, Founder of JAAGO Foundation received the UNESCO King Hamad Bin Isa Al-Khalifa Award for the Use of Information and Communication Technologies (ICTs) in Education in Paris.

The award is the recognition of JAAGO Foundation’s work in eradicating poverty by providing quality education through ICT to the underprivileged community in the remote areas of Bangladesh through Online School.

UNESCO has been recognizing innovations in teaching and learning that leverage technology to improve educational outcomes since  2005.  JAAGO  Foundation and  one other  organization were selected by Irina Bokova, Director-General of UNESCO on the basis of recommendations made by an international jury of five independent and recognized experts in the area of ICT in Education from each region.

The award was announced by Mr. Daniel Burgos, Chairman, International Jury for the Prize Irina Bokova, Director-General of UNESCO handed over the prize to JAAGO founder in the presence of His Highness Shaikh Muhammad Bin Mubarak Al Khalifa, Deputy Prime Minister and His Excellency Dr. Majed Bin Ali Al-Noaimi, Minister of Education of the Kingdom of Bahrain at the HeadQuarter of UNESCO in Paris.

Korvi at his speech thanked UNESCO for the recognition of the effort they have put in the last 10 years.  He also expressed his gratitude towards the partner organizations, Grameenphone and Agni systems without whom the Online School initiative would not have been possible.

He said, this award will not only boost the confidence but will also help spread the word and create more partnership in Bangladesh and beyond to take quality education to the most remote parts of the world. He also thanked UNESCO for giving the award on the 21st of February which is very dear to his heart. Bangladesh is the birthplace of International Mother Language Day.

In 1952, the student movement in Bangladesh fought to protect their language, Bangla (Bengali). In 2000 UNESCO declared 21st February as International Mother Language Day. He ended his speech in Bangla thanking the people of Bangladesh for supporting JAAGO Foundation.